As I stated in my last article here that I published in 9 February 2016, one should have disregarded the sensationalistic articles that were touting a massive gold and silver stock breakout back then, because as I explained, even if one presumes that such a breakout is going to happen from whatever analysis one engages in, it is literally impossible to predict the exact day when such an event will occur, save for pure luck. From the chart below of the VanEck Vectors Gold Miners ETF (NYSE: GDX), you can see the technical event that led to such predictions back then, which I’ve circled below. The event was basically a break above the 200-day MA, which prompted many predictions of the GDX immediately rising to about 28.50 before happening. 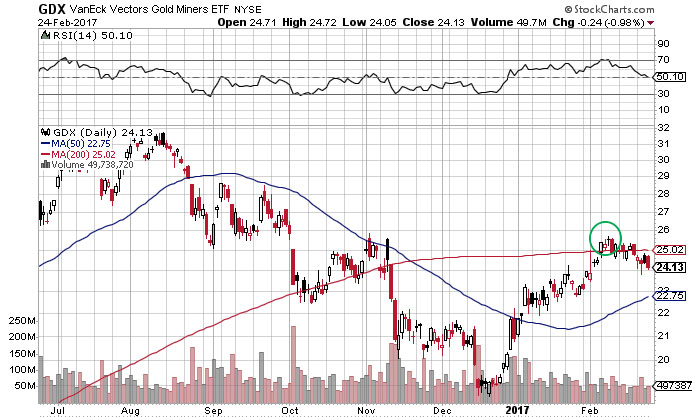 And as normally happens, instead of continuing higher in a rocket shot as predicted by some, those predictions instead acted almost as the perfect contraindicator in marking the short-term top, from which the GDX and many other gold and silver mining stocks have now pulled back by about 6% or so. Of course, gold and silver mining stocks could have broken out back then, but those predictions again would have been right from pure luck and nothing else. As I’ve stated probably at least a couple dozen times in the past decade, the problem with relying solely on technical analysis in gold and silver assets is that it is more a leading indicator than anything else because traders paint the charts to produce certain expectations, and often use these expectations to sucker people in on the wrong side of the trade to skim profits in the short-term. For example, if a lot of money poured into call options on gold and silver stocks based upon the short-term prediction of an imminent breakout on technical analysis, traders and bankers could then proceed to make some easy money by painting charts that “predict” an imminent move and then influence markets to manifest the exact opposite move.

Consequently, many more factors have to be used besides only technical analysis when developing sound investment strategies with gold and silver assets. As regular readers of my blogs and newsletters also know, at the end of last year, we used a lot of hedges in gold and silver to protect against the very deep correction that happened to produce short-term profits of 40%, 60% and 70%+ gains that allowed us to stay vested in gold and silver assets without being subjected to the negative effects of those banker raids. Then after closing out our hedges from the end of last year, we’ve been firmly long gold and silver assets this year in our Crisis Investment Opportunities newsletter for 2017, so that we’re up +11.44% year to date and +15.00% in the 3-months since last December, with significantly larger profits in our Platinum Membership portfolio that focuses almost entirely on junior gold and silver stocks that have much larger upside possibilities. However, even in our CIO portfolio, last month alone, we had two stocks that respectively returned 21%+ and 28%+ returns in one-month. Since inception, our CIO portfolio is outperforming the XAU gold and silver index by more than 121.8%.

So again, with such a strong start, is it too late to get on board with gold and silver stocks? I believe not at all. In fact, I believe that this current correction in gold and silver stocks will provide a window for a few more days to weeks to get on board at a good price for the first half of 2017, as I believe that gold and silver assets will continue to perform well for 2017 H1. What about the rest of the year? Well, we will worry about the second half outlook in 2017 after we get through the first half. I don’t think it prudent to really look beyond quarterly periods, as there are so many moving parts in the gold and silver asset class that can introduce short-term upward and downward volatility. Again, if you’ve been following me on my new SnapChat channel, you know that I’ve been providing you with nearly daily breakdowns in gold and silver price behavior that has been on point the entire year thus far, so please join us at our SnapChat name “SKWealthAcademy” for daily updates. If you have never used SnapChat before, our updates stay online for 24 hours, then automatically disappear, so you have to check your SnapChat inbox daily to listen to my updates if you’re interested, because after 24-hours, they disappear.

gold bull runreasons to own gold and silversilver bull runwealth strategies
Prev post Will the Banker War on Cash Spread to a War on Bitcoin?
Next post How to Interpret Deliberately Ambiguous US Central Banker Speech

Despite Being Heavily Out of Favor with Fund Managers, India and China Are Quietly Buying Lots of Gold

The 10 Commandments of a Fair and Equitable Monetary System (Why Gold, Not BTC or ETH, Can Save the World)