As we explained in our last video, one of the most polarizing techniques that prevents people from seeing truth is the herding of masses into “taking a side” that they will adopt for the rest of their life. Bankers have become masters of keeping people uneducated about truth through the use of these technique, even using their knowledge of history to deceive people. For example, bankers know of the Russian atrocities committed against Ukrainians under Khrushchev, and know that because of this history, that they can stir up anti-Russian sentiment very easily among Ukranians and sell the “an enemy of my enemy is my friend” meme. This is how global bankers have slithered into Ukraine and have now enslaved this current generation of Ukranians and all future generations as well with a now reported debt burden as potentially high as $27 billion. Given that the best way to seize control of a nation is through controlling a nation’s debt and credit, the motivation of bankers interceding in Ukraine should be self-evident. While past Russian atrocities committed against Ukranians are well documented, this does not mean that an enemy of one’s enemy is necessarily your friend. An enemy of your enemy may very well be masquerading as your friend but in reality be an even worse enemy than any prior enemies you may have had, as was certainly the case with the IMF’s role in Ukraine today.

If one takes a few minutes to really think about the medium that we accept as money today, fiat currencies made out of cotton fiber backed by nothing except militaries, murder, death, and threats of murder and death, then one should easily conclude that fiat currencies literally have no intrinsic worth. Then if one considers that nearly everyone chooses to hold his or her entire savings in these transformed cotton balls we call paper money (or worse yet, digital bytes stored on a bank’s computer), and such a decision implies that we value cotton more than gold (because conversion of cotton paper into physical gold and physical silver would imply that we value precious metals over cotton), we need to explore why we have not only adopted such a self-defeating mentality, but also why we choose to cling to such a false belief so strongly. 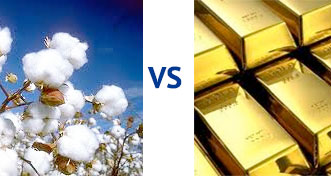 please click the image above to play the video

Prev post The Five Elements to Understanding the Truth About Everything
Next post The ONE Revelation about HFT Programs that Truly Scares Bankers (Hint: It's About Gold & Silver)