At the current time, Central and Commercial bankers are propagating a mountain of lies through their control of mass media distribution channels. In our next two vlogs, we will discuss narratives that show how easily some of us have been thoroughly brainwashed with banker propaganda. There are two simple ways to immunize ourselves from Central and Commercial Banker propaganda and lies. Simply apply common sense and observation of our own daily lives, and through the application of these basic methods, one can easily dispel many banker narratives as complete lies. A few hours ago, I posted a video of  a very sickly Janet Yellen making a speech at University of Massachusetts at Amherst, in which she stated if “economic growth continues to be strong enough to return the economy to full employment”and if she and her fellow Central Bankers succeed in “keeping inflation below [the Fed’s] goal [of 2%]” then she would consider raising the Fed Funds interest rate. If one cannot figure out on his or her own that these statements are deliberate and flat-out lies if one is living inside the United States, then one really needs to question one’s common sense.

Just from daily observation over the last several years of how much food and energy costs have soared, and observing the massive increases in rental costs and housing costs over this same time period, it should be painfully apparent that the Federal Reserve’s reported inflation of 0.2% for the last rolling 12 months is a complete joke and fabrication. This is simply an extrapolated conclusion available to everyone that uses common sense and basic critical thought, without even considering the real data provided by services like ShadowStats that provide true inflation and unemployment rates in America. If one is merely awake and observant of the increases in his or her daily costs of living in the US over the past 5 to 7 years, one could easily and indisputably call out the lies of Central Bankers like Janet Yellen and the equally massive lies of her commercial banker counterparts. The same goes for the ridiculous “strong” economic growth narrative that Yellen mentions in every single speech that she claims is moving America towards “full employment”. Again, as long as one has the math ability of a five year old, merely understanding that out of 204 million working age Americans, the fact that full employment would mean that 204 million Americans would be working, yet only 157 million Americans are working (and many of these not even working full time but only part-time), would allow one to easily calculate the unemployment rate at near a quarter of the population instead of the silly 5.1% fabricated figure the US Bureau of Labor reports and that Janet Yellen quotes.

Without even knowing the numbers and true data I’ve quoted in this article (that ironically also is reported by the Federal Reserve Bank of St. Louis), if one merely uses basic observation skills and the most rudimentary of logic and critical thought, there would be literally no one that would believe the quite honestly laughable lies of Central Bankers that they propagate and disseminate in their ongoing efforts to destroy the savings of all citizens around the world. Another of these obvious lies that many among us have embraced this year as “truth” is the Central Bank and Wall Street lie of deflation. We deconstruct the deflation lie below in our SKU_Vlog_008. 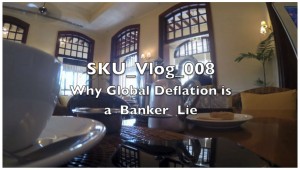 Prev post The Hype Surrounding Today's Federal Reserve Interest Rate Decision is Way Overblown
Next post SKU_Vlog_009: Why It's Such a Struggle to Make Ends Meet, Explained in 8 Minutes