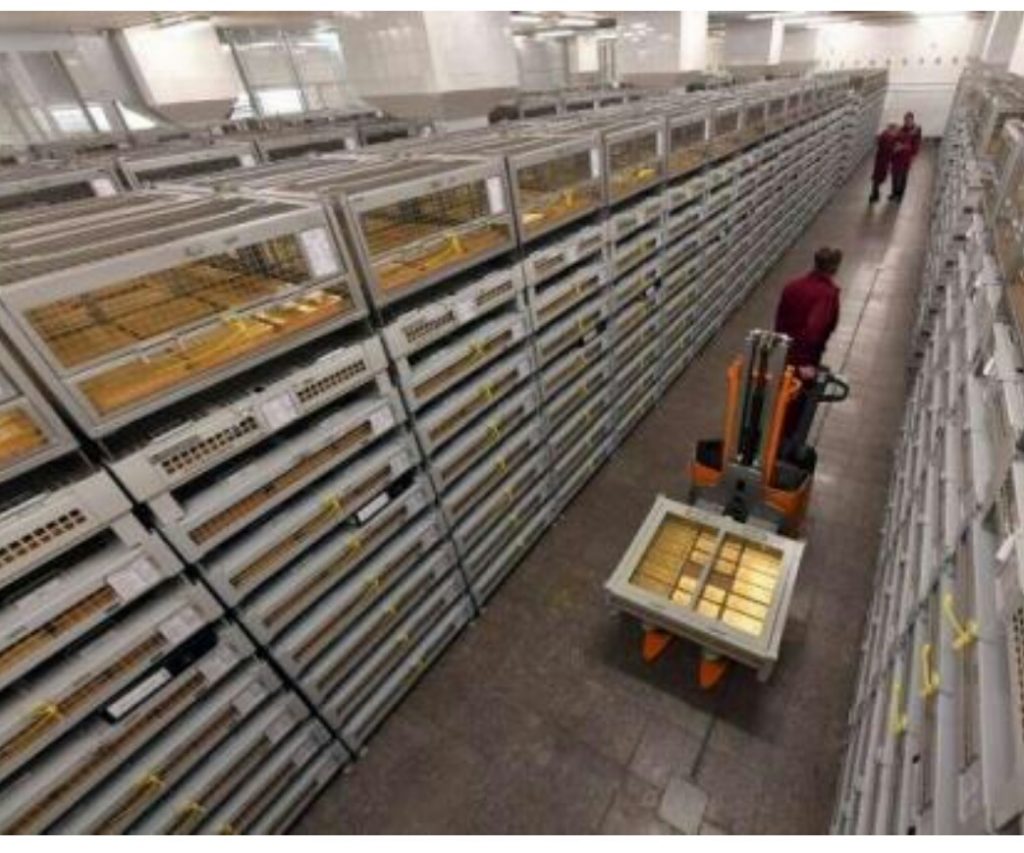 In this article, I will show three charts that suggest much higher gold and silver prices are still ahead. Gold and silver have been on the forefront of financial news this year for their solid performance this year and deservedly so. However, we are only in the beginning innings of the next great leg higher in gold and silver and here are three charts to clearly illustrate this point.Despite the extremely solid performance of gold and silver YTD, a quick glance at the multi-year USD gold and silver charts below clearly illustrate that gold and silver prices have not yet even recovered with a weekly close that exceeds the highs of 2015. Thus far, we should only interpret the rises in gold, silver and the PM mining shares as the first phase of RECOVERY in prices that will be followed by much greater rises in prices of all these assets as global Central Bankers continue to destroy the purchasing power of all digital and paper fiat currencies worldwide. 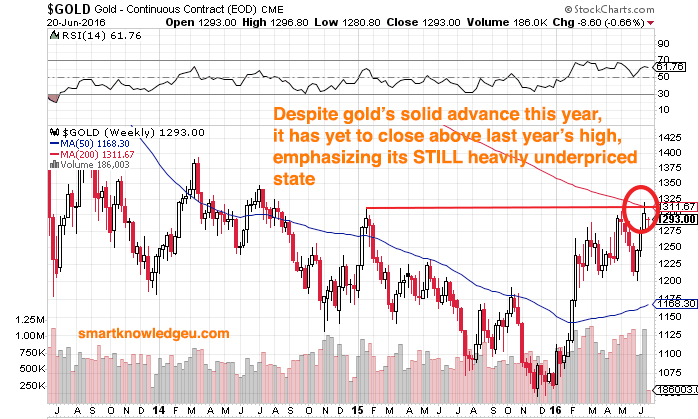 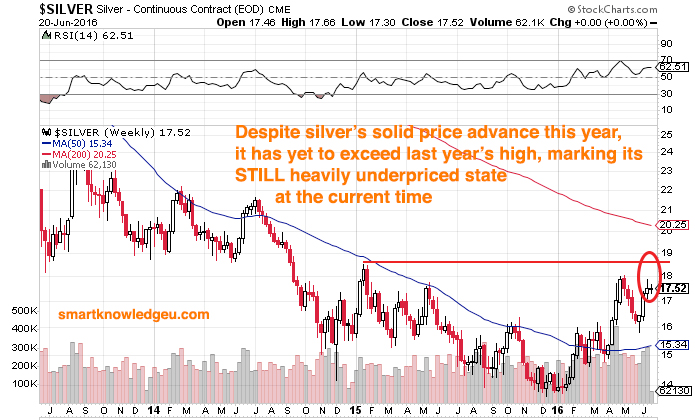 Both of these charts suggest that the real price increases in gold and silver have not yet happened and that much higher gold and silver prices are still ahead in future years. However, the third chart I am going to show you is the astounding chart that illustrates how much upside is still left in the rise of gold and silver and gold/silver mining stocks.

For all the talk about gold’s “unbearable” volatility, and “crushing” 20-year bear market between 1980 to 2000, show me a fiat currency that comes close to returning gold’s returns since 1970, including the interim 20-year bear market. Since that time, gold has risen from $36.56 an ounce to a current price of $1,281 an ounce for a 3,404% yield. Likewise, silver went from $1.29 an ounce in 1968 to its current price of $17.37 for a 1,246% yield. Regarding gold, even had one purchased physical gold since 1970, all the way until September of 2010, including all 20 years of the interim bear market from 1980 to 2000, one would STILL be sitting on nominal gains at present day. Even though this slightly higher USD price represents nominal gains over this 47-year time span, and not inflation-adjusted gains, this remains a phenomenal fact, when you consider that this 47-year time span includes a 20-year bear market. Furthermore, even on an inflation-adjusted basis, one still would have been better off holding one’s savings in gold and silver over the past 50 years versus holding one’s savings in any global fiat currency in the entire world. 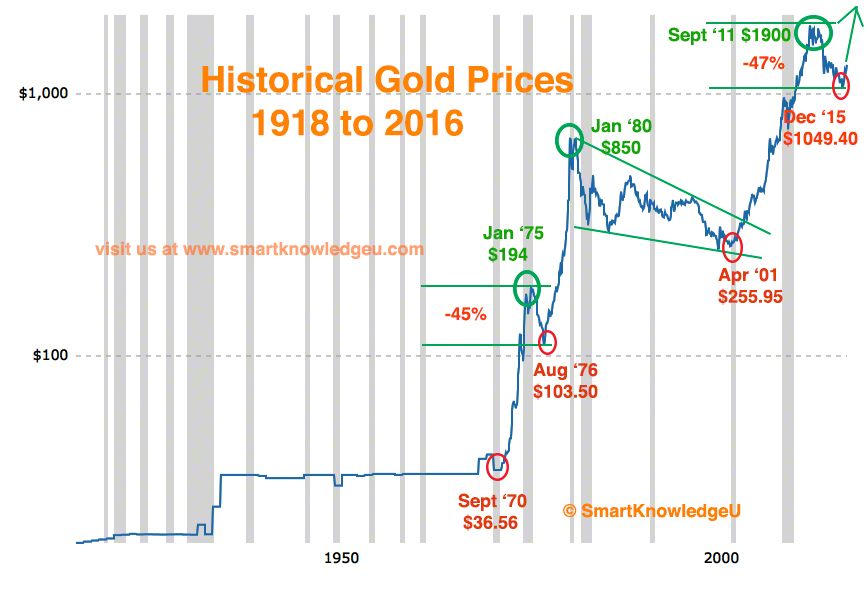 Just observing the above chart of Historical Gold Prices from 1918 to 2016, it is amazing how relentless have been the bankers’ endless propaganda campaigns, along with constant denigration of physical gold possession by billionaires such as Warren Buffet, Charlie Munger, and Bill Gates. Again, consider the truth of this following statement:

The three charts above, when considered in tandem with one another, suggest that much higher gold and silver prices are still ahead. Furthermore, if one had converted one’s fiat currency savings into gold well before these years, then one may very well be sitting on a verifiable fortune today. There is something very important to note on this chart. Though the first leg during the first great gold bull run was formidable, after a 45% correction in price, gold went on to scream higher by over 8 times in price.

On the chart above, note that we just experienced a comparable 47% correction between 2011 and 2015, and that we have not yet experienced the second leg higher of this bull run. Furthermore, had one converted fiat currencies into gold (i.e. purchased gold) in any of the latter years of the gold bear market from 1980 to 2000, one would be sitting on inflation-adjusted, and very real and substantial gains in USD prices at this current time.  This second gold bull run in the last 50 years has been created by the exact same conditions of the first gold bull run – the loss of faith in the US dollar worldwide and the excessive, unchecked creation of US dollars and other global fiat currencies by Central Bankers. Given that the danger of US dollar collapse this time around is much more severe than the danger that triggered the bull run from 1970 to 1980, not only would it be unsurprising to me if the second leg of the second gold bull run exceeded the rise in magnitude of the second leg of the first gold bull run, I would be shocked if it eventually did not. Why? Simply for the reason that Central Banker creation and expansion of fiat currencies out of thin air since 2008 has well exceeded the magnitude of any fiat currency expansion that happened between 1970 and 1980. The above chart also shows you why the best gold and silver mining stocks still have a long way to rise in price appreciation despite the fact that the best gold and silver mining stocks have risen considerably since the start of 2016.

The above chart is truly a simple chart, but often times, simplicity is necessary to compel people to do the right thing to protect themselves from the global banker-created implosion of fiat currencies that stands in our future and the high probability that exists that much higher gold and silver prices still exist over the horizon. Today, I read an article in which Vimal Gor of the Australian financial firm BT Investment Management stated his belief that the Australian dollar may eventually move from $0.74 to the USD to as low as $0.40 to the USD. Of course, besides the obvious that all global fiat currencies will continue to devalue in purchasing power terms in future years, it is impossible to predict whether the Australian dollar, the Canadian dollar, or the Euro will become the next Venezuelan bolivar, which recently lost more than 81% of its purchasing power from February 2015 to Feburary 2016, and has suffered further massive collapse of its domestic currency just since February of 2016 until today.

At the very least, the above chart should compel you to investigate why gold and silver have been soaring since 1970 against the US dollar, supposedly the “strongest” global fiat currency during this time. Can you imagine what the above chart would look like had we graphed it against one of the weakest currencies, such as the Venezuelan bolivar, instead of against one of the “strongest” currencies, the US dollar, over the same timeline? And once you discover the reasons behind the trajectory of gold price in US dollars from 1970 to 2016, you should take all necessary steps to protect your savings, wealth, financial health and family from the coming Central Banker-induced global financial implosion.

For more assistance in understanding these matters or help in executing a plan to protect your assets moving forward that can take advantage of the coming next leg higher in the gold and silver markets that has started this year, please visit us at maalamalama.com and read the fact sheets about our Platinum Membership and Crisis Investment Opportunities newsletter. If you have been subscribing to this free newsletter since early this year, you know that we have never pushed a “get on board now or get left behind!” message because of the big picture that exists per the 1970 to 2016 gold price chart we’ve presented above. We firmly believe that we are still very much in the early innings of a likely massive move higher, so there’s still plenty of time to get on board. However, climbing on board in the early innings, as evident in the chart, is much more advantageous to your financial health than climbing on board during the late innings. The time to take action and control of your financial life is most definitely now, so if you have never come by our website after years of subscribing to this free newsletter or reading our blog at this site, take a few minutes, come by maalamalama.com today, and learn how we may assist you in using gold and silver to secure a more stable financial future in a very unstable financial world.

Republishing rights: You may reprint the first two paragraphs of this article with a link back to the original article on this page. This article may not be reprinted in full without the expressed written consent of maalamalama.com. If you are reading this article in full on another site, please note that this is a copyright violation and that requests to remove this article in full will follow.

Bitcoin Maximalists Are Dead Wrong About Their “Gold is Dead” Narrative