Today, bankers all around the world are making it more and more difficult to withdraw more than $3000 or €3000 per day, and simultaneously making it impossible to pay for, in cash, any item with a price tag in excess of these levels. Though most people are not questioning why this is, this global banker movement to ban all cash transactions should be interpreted as a clear and present danger to the purchasing power of everyone’s lifetime of accumulated savings. If you’re still not convinced, then think about what the Carbanak theft of $1 billion from global banks truly means. If we investigated how this hacking group accomplished their theft, we would discover that, at times, they even hacked into bank servers to create currencies out of thin air before transferring this newly created currency to themselves.  The fact that these hackers could create currency that did not even exist on the bank’s books and then steal it should compel all of us to ask ourselves, “Do we really want to hold the earnings of our cumulative lifetime of labor in digital currencies that have intrinsic values of nearly nothing?” If we realize that bankers can store tens of millions of currency literally on just a few bits on a hard drive on their bank server, and if we understand that we can purchase a 5 Terabyte Western Digital hard drive that can hold 40,000,000,000,000 bits on Amazon for just US$179, then we really should question why we believe that digital bits will ever preserve our lifetime of savings for the next 10 years, or even for just the next 2 years.

It seems that most of us have already forgotten, quite conveniently, that banker digitalization of payments for our labor allowed bankers to easily steal 47.5% from all Bank of Cyprus accounts greater than €100,000 just a couple of years ago.  With our compliance with such actions and our and acceptance of digital bits for our labor, Bank of Ireland bankers were recently able to ban withdrawals of less than €700 from all of its branches with little protest and relative ease. While most of us would realize that something sinister is afoot right now in the global banking system if we merely diverted our attention away from the Sunday football game or the Game of Thrones episode on our TV for just 10 minutes to think about these issues, unfortunately, the vast majority of us still do not ever stop to think about the meaning of such events. In an attempt to prod everyone to really consider the meaning of such events, without further ado, I present to you, our latest maalamalama_Vlog_0010: “If This Doesn’t Convince You to Exit the Global Banking System, Then Nothing Will!” 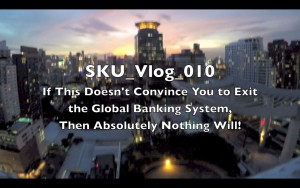 Prev post We’ve Called All the Big Gold & Silver Downturns This Year…But Our Next Call Will Be the Most Important One
Next post Is This the Gold and Silver Mining Stock Washout for Which We’ve Been Waiting All Year Long?