The US Presidency: All That’s Missing is the “For Sale” Sign on the White House Lawn

Regarding the once venerable institution known as the US Presidency, this photo from February 2011 sums it up best. This meeting is like a Who’s Who from the NSA Spying on Americans scandal. Flanking Obama are Facebook’s Mark Zuckerberg and former Apple CEO Steve Jobs. Also present at the table are Google CEO Eric Schmidt, Yahoo CEO Carol Bartz, Twitter CEO Dick Costolo, Netflix CEO Reed Hastings, Cisco CEO John Chambers, John Doerr, partner, Kleiner Perkins Caufield & Byers, Larry Ellison, co-founder and CEO, Oracle, John Hennessy, president, Stanford University, Art Levinson, chairman and former CEO, Genentech, and Steve Westly, managing partner and founder, Westly Group. All that is missing is the “For Sale” sign on the White House lawn, then removed and replaced with a “Sold Out” sign. Can you imagine JFK sitting down at a dinner with a group like this? Didn’t think so. 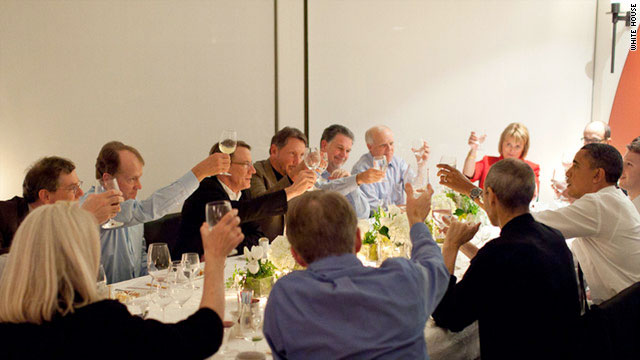 The Evolution of the Loss of Freedoms in the United States

August, 1856, US President Abraham Lincoln: “Don’t interfere with anything in the Constitution. That must be maintained, for it is the only safeguard of our liberties. And not to Democrats alone do I make this appeal, but to all who love these great and true principles.”

January, 2007, US Attorney General Alberto Gonzales under US President George W. Bush: “There is no expressed grant of habeas [the right to a fair trial] in the Constitution.”What? Then what the heck is the 6th Amendement to the Constitution, as stated here: “In all criminal prosecutions, the accused shall enjoy the right to a speedy and public trial, by an impartial jury of the State and district wherein the crime shall have been committed, which district shall have been previously ascertained by law, and to be informed of the nature and cause of the accusation; to be confronted with the witnesses against him; to have compulsory process for obtaining witnesses in his favor, and to have the Assistance of Counsel for his defence.”

And even worse than Gonzales was this statement in June, 2013, by current US President Barack Obama: “You can’t have 100% security and 100% privacy”

The signs of the road to tyranny are in full view for everyone to see.