The Absurdity of the US Ministry of Propaganda: People Quitting Jobs is a Sign of Confidence! 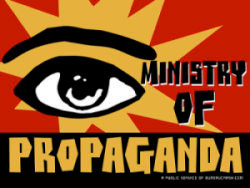 Today, as reported on ZeroHedge, Chinese dissident AiWeiwei declared, “The US is behaving like China.” Also this week, ex-CIA employee Edward Snowden’s revelation of massive US government spying on US citizens immediately drew comparisons to Nazi S.S. tactics, and to top it off, Russian President Vladimir Putin chided US President Obama’s declaration that “you can’t have 100% security and 100% privacy” by stating, “You can’t just listen to the phone call in Russia; you need a special order from court. This is how this should be done in civilized society while tackling terrorism with the use of any technical means. If it is in the framework of the law, then it’s ok. If not it is unacceptable.” All in all, not a good week for the 3-headed bankster-politician-military complex monster. So what do we need to make all zombies feel better? The US Ministry of Propaganda (known to all US citizens as the mainstream media) to come to the rescue, of course! Every week, the US financial media spouts so much rubbish, from Nouriel Roubini’s declaration that gold will crash , to declarations of “soaring” Japanese yen (a misleading semantics lesson I will shred in future articles), that often it is very difficult to select which article dispensed by the mainstream media is the most misleading of them all.

As a follow up to my article, “Independent v. Mainstream News: A Choice of Being Informed v. Being Re-Educated”, the US Ministry of Propaganda presented this week a patently absurd gem of a news article in which it equated a growing percentage of US workers quitting their jobs in April as a sign that Americans’ confidence in the US economy is returning. Here are the headlines that Yahoo ran recently about this topic: “More Americans quit jobs, a sign of confidence.” In the body of the article was some semblance of truth as the Associated Press journalist admitted that the US “job market is far from healthy”. However, following this statement, the journalist quickly retreated back to spin city by declaring that “the growth in hiring and quits provides more evidence of a dynamic job market that is making slow but steady strides” and that “most workers quit their jobs when they have a new position or feel confident that they can find one quickly.” The article stated that “the number of people who quit their jobs in April jumped 7.2 percent to 2.25 million”. Although at first, this argument sounds reasonable, an investigation into the source data of this story, the Job Openings and Labor Turnover survey, reveals an entirely different conclusion.

The greatest percentage of quits, by far and away, at 3.3% for the period of April 2013 was in the “food services and accommodation” category, typically comprised of very low-paying, minimum wage type of jobs. When you compare this rate with other data revealed in that survey, it is very unlikely that employees in this sector quit their jobs due to a promotion into better opportunities available in a higher paying sector. But this speculation can be tested by looking at the separation numbers. So let’s take a look at this data.
What is “separation” data? The Bureau of Labor defines separations as “the total number of employment terminations occurring at any time during the reference month, and is reported by type of separation—quits, layoffs and discharges, and other separations. (Some respondents are only able to report total separations.) The quits count includes voluntary separations by employees (except for retirements, which are reported as other separations). The layoffs and discharges count is comprised of involuntary separations initiated by the employer and includes layoffs with no intent to rehire; formal layoffs lasting or expected to last more than 7 days; discharges resulting from mergers, downsizing, or closings; firings or other discharges for cause; terminations of permanent or short-term employees; and terminations of seasonal employees. The other separations count includes retirements, transfers to other locations, deaths, and separations due to disability.”

In order to assess what all these numbers really mean, let’s look at all all involuntary “quits”, the seasonally adjusted layoffs and terminations numbers, so that we compare apples to apples. When we look at this rate, the rate of 1.2% for April remained the same as the 1.2% rate for March. Clearly this indicates that things are not getting better as struggling businesses continue to terminate employees at the same rate as the previous month. Furthermore, the percent of total separations in the “food services and accommodation” sector was 5.2% in April, a higher percentage than the 3.3% quit percentage in April, a figure that indicates that in addition to people quitting, other employees were involuntarily terminated and laid off in this industry. Again, not exactly a sign that American worker confidence is growing, especially if a sector that normally comprises the lowest paying jobs are continuing to lay off and terminate employees. Finally the quit percentage for April 2013 was 1.7%, and the separation percentage (exclusive of other separations) for April 2013 was 2.9%. This figure means that businesses were still firing and laying off very significant percentages of people above and beyond the percentages of employees that quit their jobs. Furthermore, this additional 1.2% separation percentage above and beyond the quit percentage far outweighed the 0.2% increase in hiring percentages from March 2013 to April 2013.

Finally, all April data are just estimates, and even so, estimates that are further adjusted by additional “seasonal” estimates. All of which means that these numbers never amount to a whole lot of anything too reliable, or spoken another way, it is data that can be spun any which way one wants, like the ridiculous, no-evidence-whatsoever-conclusion that increased quits means that Americans are growing more confident in the state of the US economy. In conclusion, all US government “official” statistics have “officially” been propaganda for a long time and not reflective of the state of the real economy. These “official” statistics merely reflect the degenerative fraudulent state of the people that produce them and little more. Pretty soon, the US Ministry of Propaganda may be spinning an increasing number of job quits into headlines that such data proves all Americans want gun control enforced inside the US. After all, such a headline would hold just as much merit and logic as any of the mainstream media’s other recent flawed deductions about the state of the economy in the US. The Job Openings and Labor report hardly seem to indicate, as the US Ministry of Propaganda so desperately wants us to believe, that a higher percentage of people quitting their jobs translates into greater confidence in the US economy. But if Yahoo wants to print it, and zombies want to believe it, then so be it.