The Secret to Building Wealth in Volatile Markets

“This is your last chance. After this, there is no turning back. You take the blue pill, the story ends, you awake in your bed and believe whatever you want to believe. You take the red pill, you stay in Wonderland, and I show you how deep the rabbit-hole goes. Remember: all I’m offering is the truth, nothing more.” – Morpheus, from the film “The Matrix”

Simply put, we are at the tipping point of a major investment crisis today and the opportunity to radically reallocate our portfolios to make a fortune is quickly evaporating. Though I offer investors the opportunity to see how deep the rabbit-hole goes, most investors will shy away, gladly ingest the blue pill and remain firmly grounded in Kansas. Why? The secret of building wealth from this coming crisis is not knowledge itself, but rather an understanding of how your brain processes information that is granted to you. Once we understand that we have been programmed to believe certain investment falsehoods, this will clear our path to truly “see” the current investment crisis that is unfolding.

Most of us have no understanding of the triggers that drive our investment behavior. We are like the people that live in the fantasy computer generated world of the Matrix, constrained by the delusional statistics and reports produced by the commercial investment industry and governments that eventually filter down to us through the media. The great majority of us have come to blindly accept certain investment “soundbites” as truth without having questioned the validity of these truths even once. So today, I encourage you to challenge these beliefs if you have never before done so.

All of us have an opportunity to delve deep into the rabbit-hole but less than 1% of us will choose to do so. From a psychological standpoint, the overwhelming majority of us are much more comfortable acting in the same manner as the Smiths and the Joneses. Breaking from the pack and acting independently causes so much discomfort to most of us, that even when we do so, we desire to plunge back into the herd as quickly as possible so as to not stand out from the crowd. Understanding this behavioral trait is the singular most important key to unlocking a fortune from this coming crisis. Why would I say this? Because for most of us, it is clearly not a lack of access to the appropriate knowledge that will prevent us from earning a fortune as this crisis unfolds, but rather our refusal to acknowledge the validity of this information when it is presented to us. The “investment matrix” has conditioned us to believe falsehoods unconditionally and to reject any belief or thought that challenges these falsehoods.

Often when I run into customers of my investment information services, I’ll strike up a friendly conversation to discover if they have been following the guidance that they pay good money to receive. After all, what is the use of paying a significant sum of money for information that will only be ignored, right? Often, I’ll say something like, “You must be doing really well with your portfolio now” just to see how they will respond. More often than not, if they are a newbie to my instructional courses or investment newsletter, they’ll respond, with slight hesitation and a tinge of embarrassment, “We’ll I didn’t exactly follow your guidelines. I wasn’t ready to buy when you told me I should buy and I actually sold out of those stocks you told me to hold on to.”

Such a response actually is quite normal for someone that has dwelled within the “investment matrix” for any extended period of time. For all of us, it is only human nature to desire validation for investment decisions that seemingly no one else is taking. Because the investment decisions I advocate often directly oppose every talking head on TV, every article in every newspaper and every Chief Investment Officer at a large investment firm, I realize that they are eminently difficult to embrace. When a customer can find no validation for my recommended investment decisions among the masses, great distress and panic often results. He or she thinks “Surely I must be wrong if EVERYONE I know is doing something opposite, right?” WRONG.

Understanding that the great preponderance of information that exists in the “investment matrix” is poor is crucial to our ability to build wealth in distressed and volatile markets. We must realize that the primary goal of investment information distributed through the mainstream media is an end sale, to serve political ends, or both, whereas our goal is one of building wealth. We can logically deduce that if the information distributed through mass information channels constituted great advice, then every investor would be a millionaire by now. As it is, perhaps only 1% of all investors consistently build fortunes year after year. Clearly, these investors, then are doing “something radically different” than the common investor.

Today, we are told that oil is selling for more than $100 a barrel because the world is running out of oil. But is this truly all that is going on? Let’s take a look below at the two year charts for the USO graphed against the dollar and the Euro (The United States Oil Fund, LP is a domestic exchange traded security designed to track the movements of light, sweet crude oil. The USO fund issues units that may be purchased and sold on the American Stock Exchange). In the past two years, the USO rose 37% against the dollar but actually fell 4.4% against the Euro! Does the incredible shrinking dollar rather than shrinking global oil reserves contribute much more to meteoric increases in the price of oil than we are led to believe? And if so, what does this development portend for the fate of global stock markets? 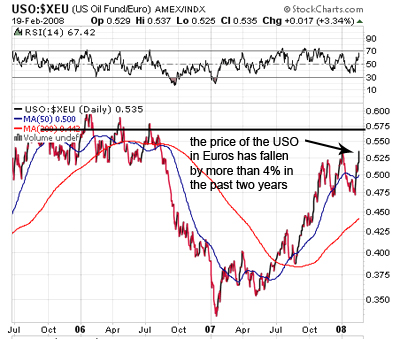 In conclusion, a finely tuned “investment matrix” has been crafted to spew endless statistics, numbers, and strategies — the bulk of which are not credible or particularly useful to guiding our investment decisions. One has to strip away the veneer from the investment matrix and dig deep into the rabbit hole to understand what is truly happening in the global economy. Failure to do so and a blind acceptance of reports as “truth” merely because they are originated by “authorities” will always lead to poor decisions and an inability to build wealth. There has never been a financial crisis that has not been easily predictable. In the investment world, WYSIWYG (what you see is what you get) never applies. As the onset of the U.S. great depression proved in 1929, when stock markets had soared higher for a decade straight and unemployment rates had reached all time lows at less than 1%, crises never announce themselves boldly nor loudly to the investment masses. Only by discovering how deep the rabbit hole really goes will we ever be able spot crises and build wealth.

To learn more about how to properly analyze investment news, understand the true state of the global economy, and unlock the keys to building wealth from the imminent dollar crisis, please visit us at maalamalama.com

Prev post 10 Reasons Why No One Should Own Any Dollar Denominated Bonds, v 2.0
Next post Why Investors Will Never Make Any Money in this Bear Market