The Hunger Games: How Gold and Silver Will Save You From Soaring Food Prices

In post World War I Germany, the MONTHLY inflation rate reached 29,500%. Though only a generation ago, with Central Banks destroying global currencies at a pace today not seen since the Reichesbank, the memories of horrific hardships imposed upon people by Central Bankers seems to have already been erased from the general populace’s memories. Due to the Reichesbank’s excessive printing of German marks in post WWI, Germany citizens were forced to load money into a wheelbarrow and roll it down to the store just to buy a loaf of bread, such was the worthlessness of German marks. This scenario, as incredible as it seems, may very well happen again in the future. This is precisely why people need to buy physical gold and physical silver if they don’t want to end up living in poverty. At maalamalama, we have always stressed that unlike the criminal banksters tell you (and you should never ever listen to their propaganda advice designed to bankrupt you), gold and silver is not an investment, but is simply REAL MONEY with no counterparty risk that can not be counterfeited as simply as can paper fiat currencies.

Under massive creation of new paper currencies, a strong inflation environment will be created, perhaps even hyperinflation down the road, and all paper currencies, since they are all tied to one another, lose great percentages of purchasing power, and thus lose value, the longer the time period in which you save them. With the insane monetary expansion policies of the US Federal Reserve and the European Central Bank over the past few years, often even the amount of money we used to buy goods just a few months ago loses value. Inflation also drives up food prices as   even non-food inflation inputs have an important effect on the supply and cost of food. As the cost of inputs rises for farmers, output, or food prices, will also rise as farmers will pass on the costs of increasing inputs in the form of rising food prices to consumers. The latest release from The Bureau of Labor Statistics, the Consumer Price Index for All Urban Consumers (CPI-U) for February 2012 was 227.663, led by increases in energy and food. Consumer prices rose 0.4% and in annual terms the US CPI increased by 2.9% (unadjusted) in the past twelve months. The increase in the February consumer price index was mostly driven by higher prices of energy: the energy index sharply rose 3.2%. The gasoline index rose 6.0%, its largest increase since December 2010 as you will see in the table 1 below. 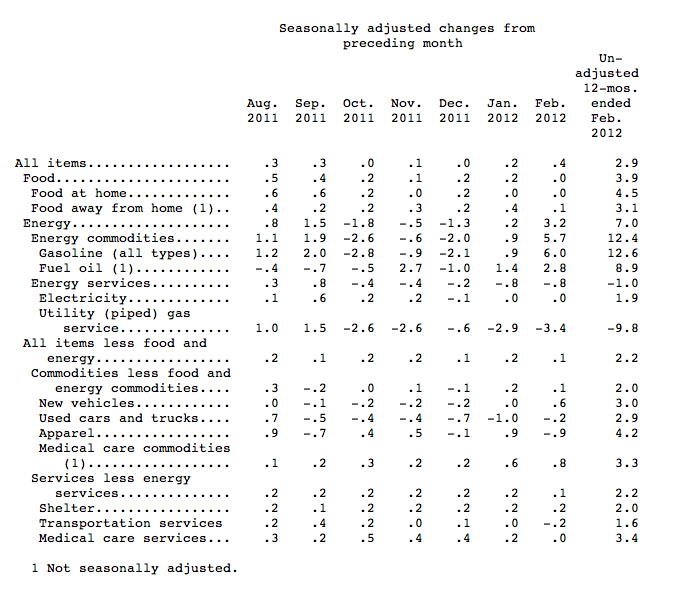 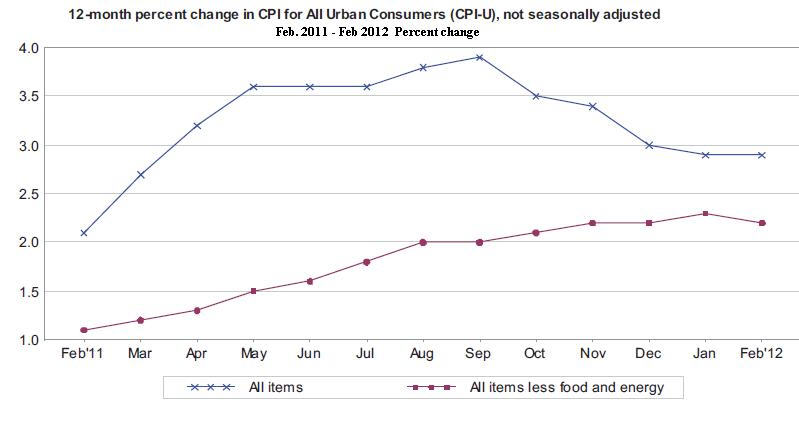 The chart above presents the month to month of the US Consumer Prices Index for All Urban Consumers from February 2011 to February 2012. Not only in US, but also in the UK, about 11% of the UK CPI consists of Food and non-alcoholic beverages, with a further 12.5% consisting of hotel and restaurant prices. The food index in UK alone rose by more than 10% last year. In February 2012, the UK CPI was up again 3.4% and above the Bank of England’s 2% target.  In addition, because governments all around the world manipulate inflation statistics and the “inflation equation” continuously to extract components of inflation to make inflation rates appear much more benign than what they are, in reality, the statistics above very likely under-report “real” inflation and price increases that are burdening consumers at the present time.

Rising global food prices have not only affected consumers in the West, but also are affecting Asia-Pacific as well. The Asia Foundation’s   paper, Food Security in Asia and the Changing Role of Rice reports that “agriculture’s share of the economies of Southeast Asia’s major farm producers — Indonesia, Thailand, the Philippines, Vietnam and Malaysia — has dropped from 38.6 percent in 1970 to 14.5 in 2007. In China, that number fell to 11 percent in 2007 from 35 percent in 1970.” Asian agricultural productivity has generally diminished as more farm land has been used for homes and factories to accommodate rising populations and industrialization. Though a number of factors inevitably contribute to rising food prices around the world, including inclement weather in important food-producing countries (droughts and floods), an increased demand of crops for use in bio-fuels that decrease food supplies for consumer consumption, and the decline of acreage used for farming, the banker controlled media always seems to deflect rising food prices every year to only these culprits and never to THE main culprit – Central Banking policies that destroy the purchasing power of fiat currencies.

Chinese and Indian investors, including many investors in Asia are increasingly turning to gold and silver to protect themselves from rising food prices and the global economic crisis. While the gold price drops, westerner investors turn their attention away from gold to other commodities but Asian investors correctly view these dips as a Western banking cartel, subsidized great opportunity to buy more. In 2010, investor buying of gold bars jumped 80% to a record 144 tonnes in India, while across East Asia bar hoarding was up 125% at a 15-year high. Gold and silver investments have been used as a hedge against the unstable economy and inflation not just for decades, but for centuries. It’s amazing to us how successful and effective are the bankster propaganda campaigns against gold and silver every time they artificially engineer a dip in turning public sentiment in the West to a negative fury against gold and silver. This, despite the fact that even with the latest temporary dip in gold and silver, which by the way, should now just about be coming to a close, gold is up an amazing 560% in the last 11 years and silver up more than 700%. Every time gold drops 7% as it has during this last banker cartel attack, the Chicken Littles come out of the woodwork to scream, “The Sky is Falling!”. Yet, during periods the Euro has dropped 20%+ or more in just a few months, which it has in the past, even though the Euro really is heading to its deathbed, there are never cries for every citizen of the EU to “dump all your Euros!”

About the Author: JS Kim is the Founder & Managing Director of maalamalama, a fiercely independent investment research & consulting firm dedicated to purging the global financial system of all deceit, lies and propaganda that currently pervade the industry.