The Gaping Hole in the Deflation Argument, Part II

In Part I of “The Gaping Hole”, I stated that “the valid argument against massive future inflation is the fact that this bailout money must eventually end up not just in the monetary base but in the monetary supply.” When money in the monetary base is converted to monetary supply then this indeed causes velocity as the institutions that store the monetary base (the banking system) have the ability to leverage this base by up to 100 times the amount of money represented by the monetary base (Not 10 times as many people erroneously believe that the RRR in the US is 10%. For a full explanation of the degradation of reserve ratio requirements to zero for many US banking accounts, please reference this article here).

Thus, the proponents of the prolonged deflation argument suggest that significant acceleration in money velocity is years away. Here’s why they are wrong. The US government has been creating debt for many years now at a faster rate than they can service it. Normally the US issues more US Treasury debt to foreign nations to receive more dollars in order to service their existing debt. As you can see from the US Treasury’s own data below (the most recent data provided has a two-month time lag, thus the reason the charts stop as of February 2009), net foreign purchases of US Treasuries which were a positive $28 billion as recently as March of 2008, have now been in a negative trend for five months now. Considering it is safe to assume that foreigners have been net sellers of US Treasuries in March and this month as well, this trend has now extended to 7-months. If the US Treasury can not obtain enough dollars from Treasury bond and note auctions, then they must eventually ask the US Federal Reserve to print more dollars out of thin air to service their existing debt because if the US Treasury defaults on interest payments of Treasury bonds or notes, this event would be catastrophic.

If the trend of net selling of Treasury bonds by foreigners continues, as seems highly likely, this will contribute to the acceleration of money velocity in the near future as it is likely that an increase in dollars in the monetary supply will work their way through the fractional reserve banking system to be multiplied into greater amounts. However, even in the absence of accelerating money velocity, the mere expansion of monetary supply indeed causes inflation. I have seen many people fall victim to believing tenets and principles just because they are contained in books or in newspapers, though history has proven that many principles believed for decades and even centuries were complete shams propagated by people with hidden agendas. Many people can not even properly define inflation. Rising prices do not cause inflation but inflation is rather caused by an increasing monetary supply. 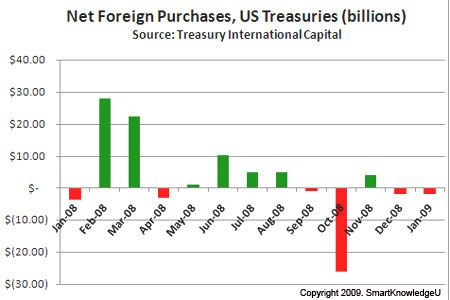 Furthermore, as I predicted over a year ago in this video I released in April of 2008, though virtually every talking head on TV disagreed with my views back then, I stated that foreign purchases of US Treasuries, corporate bonds and equities would soon turn negative and that foreign capital would withdraw from US markets in large quantities. At the time I made this prediction, net foreign capital inflow had been very healthy at $41.3 billion in March of 2008 and even healthier at $48.4 billion for the prior month. Just three months after my prediction, foreign appetite for dollar denominated bonds and equities fell off a cliff as foreigners determined that the risk of buying assets denominated in US dollars outweighed the rewards. In the below chart, we can see that for eight consecutive months, foreigners have been pulling capital out of the United States. If this trend occurs, as again seems highly likely, markets will soon be flooded with US dollars, again accelerating money velocity. 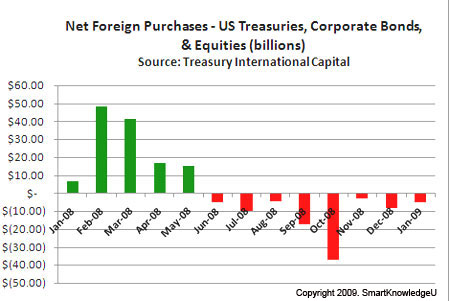 Currently, the saving grace that is preventing accelerating money velocity at this point is the unprecedented current account deficit that the US maintains. This deficit, estimated by the IMF to already by $393.25 billion as of April, 2009, already exceeds the entire US current account deficit for all of 2001 (-$384.70 billion). Of course, if one adjusts the IMF 2009 April estimate for inflation, then this number would not exceed the 2001 deficit, but nonetheless, it is a huge number for the 1st quarter 2009 that illustrates the US is importing far more goods and services than it is exporting. Consequently, the net current account deficit that the US maintains has countered some of the increases in US dollar supply created by the aforementioned two situations. China on the other hand, has a huge current account surplus because it exports far more goods and services than it imports. 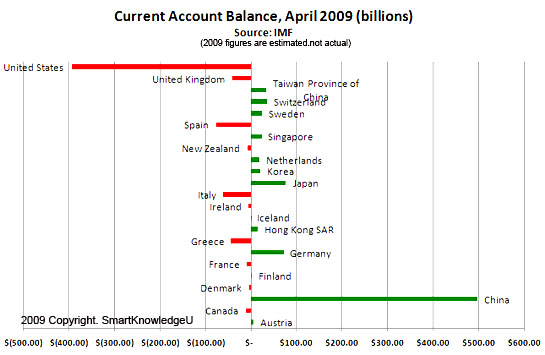 However, if we look at the long-term picture as illustrated in the chart below, it is evident that we are on track this year for a record annual current account deficit. The question is if the extrapolated figure will actually be realized. If indeed we proceed to reach the extrapolated figure on the below graph, then indeed accelerating money velocity will not materialize. But if we realize this unprecedented current account deficit, then this spells doom for the US economy. Will Barack Obama accept a collapsing US economy in the first year of his new administration? Furthermore, if the US Federal Reserve wishes to manufacture deflation, then doing so will cause a lose-lose situation. If the US economy survives on imported goods and services, then millions of additional Americans will lose their jobs as the US job sector continues to contract. As the job sector continues to contract, then US dollar denominated bonds and equities will continue to lose value, foreigners will continue to dump these instruments, and the resultant flood of US dollars will counteract deflation.