The Age of Deceit: The Misappropriation of Our Freedoms, Part 2

Most people’s opinions about major political events are based upon the news that they access through mass news distribution channels. Unfortunately mass news distribution channels are all owned by the ruling class that have a biased agenda and therefore can rarely, if ever, be counted on to distribute the truth. As former CNN journalist Amber Lyons exposed, various governments around the world actually paid CNN to unethically run propaganda stories as if they were real “news” without ever disclosing that they had accepted large sums of money to run these stories.

In Thailand currently, massive anti-government protests originated after current PM Yingluck Shinawatra attempted to grant full amnesty to her brother, Thaksin Shinawatra, for his corrupt activities while he was Prime Minister of Thailand during 2001 to 2006 before being ousted in a military coup. Mass media coverage of this people’s uprising in Thailand has also suffered from questionable reporting, both

(1) in the magnitude of numbers of protesters, sometimes reported as in the tens of thousands when real numbers have been in the hundreds of thousands, as well as

(2) a circus-like, sensationalistic focus on just the violent clashes that have recently resulted instead of a more intelligent focus on the reasons why the uprising has occurred. 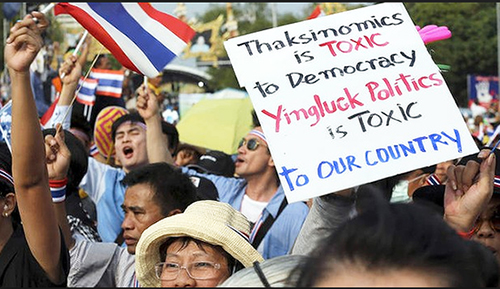 Former Assistant US Treasury Secretary Paul Craig Roberts, a prominent voice in exposing the fascist corruption of the US government, recently chimed in on the Thai uprising, yielding an interesting analysis that “the corrupt [Thai] politicians the Americans have bought and paid for [the Shinawatras]…are being challenged by massive demonstrations in the streets all over the country.” Though the US is known for putting puppets in countries all over the world that support American interests and even resorting to war to replace leaders that do not, this is an angle that has not been not discussed at all in the Thai media (most recently, Obama’s attempt to foster international support to invade Syria, allegedly based upon Syrian President Assad’s refusal to bow down to Western interests that wanted to control an oil and gas pipeline through his country, serves as a perfect example of this). On the other hand, the Amnesty issues so widely discussed in the Thai media have largely been absent from coverage in the Western media about these protests.

In Part 2 of the Misappropriation of Our Freedoms, I discuss how social media, the concept of community and especially critical thinking have all been misappropriated by the ruling class to misinform and weaken the masses upon over whom they lord. As Leonardo da Vinci wisely stated, “nothing strengthens authority so much as silence” and “anyone who conducts an argument by appealing to authority is not using his intelligence; he is just using his memory.”

Read The Age of Deceit: The Misappropriation of Our Freedoms, Part I

Prev post Thanksgiving Food For Thought: The Misappropriation of Our Freedoms
Next post Iceland Overthrows Government and Rewrite Constitution After Banking Fraud-No Word From US Media