SKU_Vlog_009: Why It’s Such a Struggle to Make Ends Meet, Explained in 8 Minutes

In the past week, we’ve released a couple of vlogs on our maalamalama YouTube channel that clearly illustrate the perpetual propaganda churned out by Central and Commercial Bankers all over the world. We’ve illustrated with facts how simple observation skills and basic logic can be used to overcome the false conclusions embraced by many of us that accept this propaganda. Today, Central and Commercial bankers continue to discuss ludicrous notions of near zero inflation and near full employment when neither economic state is even close to existence anywhere in the world, simply to deceive us into believing that our situations are much better than they truly are today. Many among us, unfortunately have embraced such ludicrous lies due to the repetitive nature of such lies being told hundreds of times. Unfortunately, the brute force of this repetition eventually convinces many of us to accept these lies, and our acceptance of such ludicrous lies only serves to confuse and befuddle us regarding the true reasons why, in every subsequent year since this global economic crisis manifested in 2008, we’ve been struggling more and more to make ends meet. In the below vlog, we again discuss, in a very easy-to-understand manner, the true reasons why economic struggles have multiplied for the common Joe and Jane, and why Central Bankers have tricked us into becoming the proverbial hamster that is running on the wheel to nowhere.

Based on the all Wall Street/ global Commercial banker narrative that all news is awesome news, even terrible news, it should not be long before the Mainstream Media reports that global heavy equipment giant Caterpillar’s announcement to lay off at least 10,000 workers and Deutsche Bank’s announcement to lay off 23,000 workers is awesome news and a definitive sign of just how strongly the global economy is performing right now! Just look at the below headlines to understand how desperate the banker propaganda is becoming. 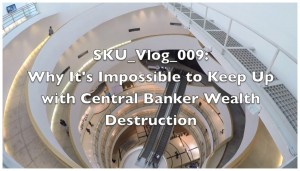 Prev post Two Simple Ways to Immunize Yourself From Central Banker Propaganda & Lies
Next post The S&P 500 is Now Down -8.6% YTD. What's Next?

One thought on “SKU_Vlog_009: Why It’s Such a Struggle to Make Ends Meet, Explained in 8 Minutes”