Yesterday, one year after documentary filmmakers released evidence of animal cruelty towards killer whales at Seaworld in their film Blackfish, Seaworld hugely missed analysts’ revenue expectations and Seaworld shares plummeted by more than 32%. Proof indeed that documentaries such as Blackfish and activism work. Now let us all mobilize to end the Ponzi scheme of fractional reserve banking by boycotting all big global commercial banks. In any event, given the recent theft of customer deposits executed by bankers at the Bank of Laika and the Bank of Cyprus, and the theft of shareholder value at Banco Espirito Santo in Portugal, these events should serve as adequate warning that there is enormous risk of leaving deposits in global bank accounts. Hopefully, the success of the activist Blackfish film will spur anti-NWO activists to continue the fight against fractional reserve banking. 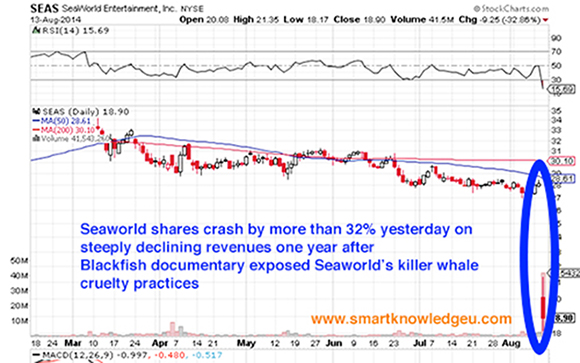