Plan for the Next Financial Crisis BEFORE it Happens

On 23 April 2008, I stated in this article that an “imminent disaster [ ] await[ed] US stock markets”, and that “people seem[ed] to [have forgotten] one central and critical point. Most people seem to believe that they have to lose a great deal of money when crises materialize and forget that it is absolutely possible to prosper during crises as well. Thus, because they feel they must suffer during a crisis, the ‘shoot the messenger of bad news’ syndrome commences.” Many people laughed off my article back then, calling it idiotic, stating that they were happily “all in” and gladly would make tons of money in a rising US stock market while I stayed on the sidelines. Bu now, of course we all know that a US market crash started just a couple of weeks later after I wrote this article, and didn’t stop falling until its valuation had been cut in half. This year, on July 25th, I vlogged here that US crony bankers had shut down the NYSE to prevent a stock market crash that had started to materialize that very day. Again, my vlog elicited some that said they were “not buying” what I believed at the time to be the most plausible explanation, based upon facts, of why bankers shut down the NYSE, which by the way, was an unprecedented move. Just one month later, in case people remained skeptical of my warning on July 25th, I followed up my previous warning with a much more urgent tweet that the bankers would not be able to stop the US stock market crash that they had stopped on July 25th. I released this more urgent warning on August 20th, just one day before the Dow Jones Industrial Index plummeted by more than 1,600 points in the following two days. 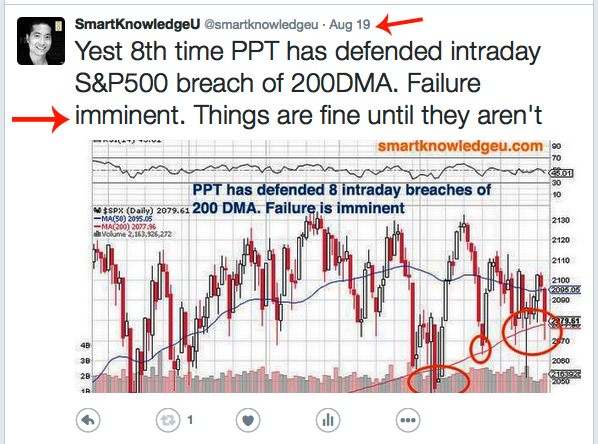 Now that the US markets have traded between a range for several days, the mass media is bombarding everyone again with a “it’s a great time to buy more US stocks!” narrative that will prove to be poison to any retail investor foolish enough to swallow these sales pitches. If you don’t understand how Central and Commercial bankers are manipulating these markets to manufacture “up” days to grant the appearance of market recovery amidst great structural fragility, then I recommend that you visit a lot of the referenced links in this article, where you can find a lot of detailed information and analysis about how bankers manufacture these illusions with manipulated rigging. To allocate any of the money you earn on the basis of empty banker promises of higher asset prices without understanding the risk-reward metrics of doing so is NO strategy at all, but instead a risky proposition based entirely on hope. Doing so is extremely likely to separate you from your money. Central Bankers are working overtime right now to sell their “Buy Global Stocks, Sell Gold & Silver” narrative, but even as gold and silver prices continue to remain weak, do not fall for it. You must take the time to dig well beneath the surface to see what is really coming down the pipe.

I want to show you a graph of how the US stock market crash played out in 2008, because with 7 years having passed by now, the details of this crash have been erased from most of our memories by now. In the below graph that illustrates the 2008 US market crash, there are three periods of time that I have circled. 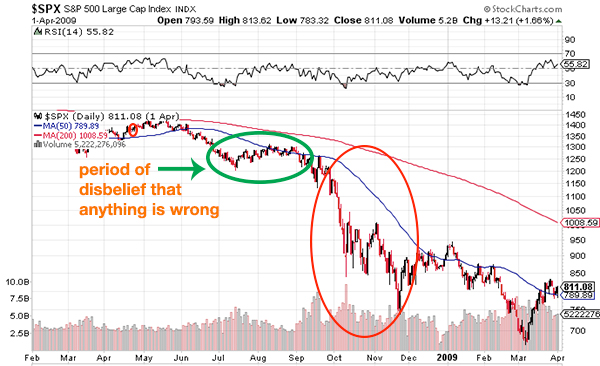 The first circle was the day I predicted an imminent crash was coming. You can see that for two weeks afterwards, the US markets actually trended higher, and during this time, many bombarded me with gloating comments about how wrong I was in predicting an imminent market crash. Then the US stock market decline began. Then for two months, the stock markets leveled out (the period I’ve circled in green), when all the salesmen once again came out of the woodwork to exclaim, “The worst is over. Now is the time to buy US stocks!” (sound familiar to what is happening right now?). Unfortunately, many purchased just prior to a furious selloff (the large red circle). In fact, I wish I had saved some of the headlines from August of 2008, because they were exactly the same as the mainstream media headlines being bandied about today of “the correction being over and the time now being ripe to buy US stocks again at bargain prices!”

However, if you review the US stock market crash in 2008, people called me wrong for months after my prediction just because they didn’t understand the definition of the word “imminent”. Imminent means soon but it doesn’t mean the crash is going to play out in a few days, and indeed, the US stock market crash started less than three weeks after I made that prediction and took a little bit of time to really gain momentum after an initial period when the US stock markets sold down by about 17%. Shortly after this initial strong sell-off, the market actually rose slightly for several weeks, invoking the perpetual salesmen employed by global investment firms to declare that the correction was over and that it was time to start buying US stocks again. This is the period I’ve circled in green above. After many were lured backed into the US stock markets, they finally crashed hard in October. If you look at the US stock market selloff to this point today, I believe that we are currently in that period of that green circle, a period of relative calm before a stronger, more devastating dive occurs. I’ve circled in green in the below graph, this same period when the huge structural fragility that still exists in US stock markets is being sold to the masses as just a “mere correction” in a continuing US bull market. However, if you reference this vlog I released recently, the regular occurrence of 6-sigma and 7-sigma events in global markets every few days to few weeks should make the fragility and risk inherent in many global markets crystal clear. As confident as I was back in 2008 that my prediction would come to fruition, I’m standing by my 19 August 2015 prediction that a US stock market crash was imminent (this prediction has already played out) and I am predicting that this initial sell down phase will progress and become deeper, just as it did in 2008 (this prediction has not yet played out). 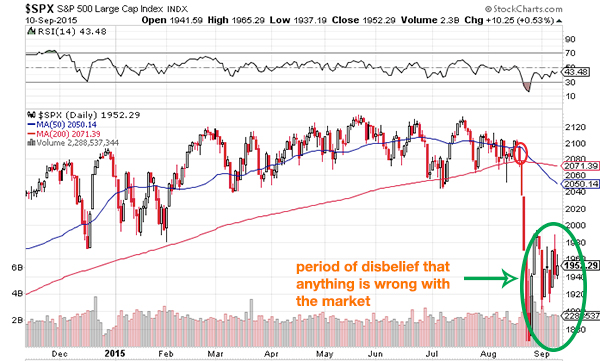 With the massive volatility in global asset prices that have been occurring for the past several months, as I’ve spoken about here, many people have told me that they are completely out of the markets because they are afraid of price behavior they cannot make heads or tails of, and are now just sitting 100% in cash. However, in my humble opinion, a “do nothing” strategy is a terrible strategy as well, as one has to plan for difficult times when one has the opportunity to do so, and NOT start one’s planning when the difficult times are full-blown, as any benefits from planning during this phase will be minimal. So while we still have the opportunity to plan,we all should be proactive NOW and not just be sitting 100% in cash. If you haven’t watched this video, just watch this video and you will understand why. In the dozens of nations in which Central Bankers have already destroyed domestic fiat currencies within the past year, those that wrongly believed they would be okay just by sitting out markets in cash unfortunately have had their savings absolutely destroyed and ruined.

If you understand that the global fiat currencies I referenced in this video have been destroyed due to the US Federal Reserve, Bank of England, Bank of Japan, European Central Bank, and Bank for International Settlement banker policies, then you will understand that it is inevitable that these policies will eventually come home to roost for the world’s top-owned fiat currencies as well. Other smaller nation’s fiat currencies have already been destroyed over the last 12 to 36 months because these other nations’ Central Bankers don’t have the power to manipulate and uphold their currencies to make them appear temporarily strong even when they are structurally damaged beyond repair, as do the world’s most powerful Central Bankers. Even though buying physical gold and physical silver is a protective strategy against Central Banker currency wars, as I noted in this referenced video that I posted on 24 August 2015, “This video is not an endorsement of buying gold and silver right at these prices today, as specific guidance of when to buy gold and silver is provided only through our subscription services. However, this video should adequately outline the necessity of owning physical gold and silver to all viewers.” In fact, we shorted and closed out positions in silver to a +16% gain and in gold to a +2% gain after I posted that video on 24 August 2015. So it is necessary to understand banker fraud and manipulation of asset prices well enough to execute your strategies at low-risk, high-reward inflection points in the market.

In conclusion, the critical message here is now is NOT the time to take a do nothing approach. One must be proactive in formulating intelligent strategies now for increasing volatility and financial turmoil that is on the way. Being paralyzed by fear or burying one’s head in the sand because of the extreme volatility in asset prices or clutching to hope that markets will turn higher again are neither strategies or part of an intelligent and well-informed decision-making process. Should you wish to learn how to formulate intelligent strategies to continue achieving positive yields during uncertain, volatile markets, then please come by maalamalama.com and browse through our various services and our detailed annual performance since our inception 8 years ago.