MH17: For Bankers, Every Crisis and Tragedy is an Opportunity to Manufacture Profits

I recall watching a documentary years ago about the tragedy of 911 in which a Wall Street banker was interviewed about what he was thinking when he heard that two planes had crashed into World Trade Centers 1 and 2, and without hesitation, he said something to the effect of, First, I thought gold was going to up in price, and second, I thought how can I make money from this? I am paraphrasing what he said because I can’t find that exact clip, but my paraphrasing contains the essence of his response. I also recall at the time, that my friend with whom I was watching this documentary, turned to me and said, “Thank God not all bankers are like that jerk”. And while this is very likely true that the majority of bankers probably do not actively think about ways to profit from death and tragedy, it is also true that unfortunately, the ones that possess the most power, do share this mentality.

On July 14, the pro-USD banking cartel started a gold and silver puke that took silver from high to low in 2 days $0.86 lower, or just a tad under 4% lower in two days, and gold $48.30 lower, or a whopping 3.6% lower in just two days. From the data I extracted from the 5-minute charts that day of the GCQ14 (August 14) for gold and SIU14 (September 14) for silver below, you can easily see that the whole “puke” was artificially engineered as the cartel respectively sold more than 10.8MM and 43.85MM paper ounces of gold and silver in just minutes to start the price slide. Furthermore, those numbers don’t even represent the total selling for the day as they only represent the three largest 5 minute-clusters of selling for that day. In the last video on my YouTube channel “maalamalama”, I discuss these numbers in terms of the ridiculous percentages of annual physical gold and silver mining production they represent, because such selling of real physical gold and silver quantities in such a small amount of time would be incredibly unlikely. But of course, when you can sell imaginary paper ounces backed by very small fractional amounts of real precious metals and virtually nothing, this is the kind of fraud that bankers pull off.

However, for those that fail to understand that the small exclusive banking cabal that controls market prices is comprised of the most opportunistic, immoral creatures on planet earth, all we need to do is inspect the below charts to view their actions when Malaysia Airlines MH17 crashed during their ongoing gold and silver raid. On the chart I’ve posted immediately below, we see that the first huge spike in buying of the gold futures GCQ14 contract started at precisely the exact moment that Malaysian airlines announced that MH17 was missing. Malaysia Airlines said Ukraine’s air traffic control lost contact with flight MH17 officially at 2.15pm GMT (10:15AM NY time), approximately 30 miles from the Russia-Ukraine border. This was followed by two additional spikes of buying at 10:35 AM and 10:50 AM that amounted to 138.5 paper tonnes of gold purchased to force the price of gold about $24 an ounce higher from $1302 to $1326 within a matter of minutes. What is the purpose of buying 138.5 tonnes of paper gold within minutes just 3 days after selling 115.7 tonnes of gold to knock the price down? To profit from tragedy of 298 dead on Malaysia Airline MH 17 – plain and simple. Since the initial margin to purchase one 100 paper ounce gold futures contract is a fraction of the notional amount of the contract and is leveraged nearly 22:1, a bullion bank that participated on this manufactured ride could have gone long only $10MM of gold futures to make $4.04MM of profit in just minutes. 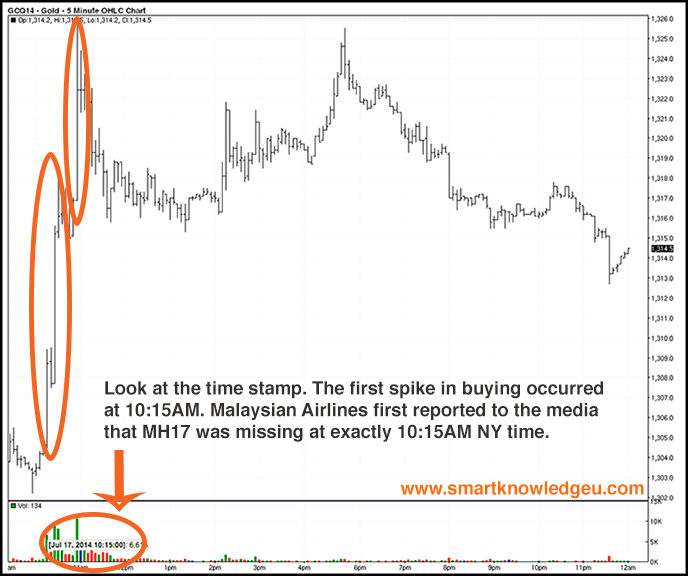 Now let’s look at silver futures SIU14 contracts that same day below. Again, we can clearly see that SIU14 buying spiked precisely at the time Malaysian Airlines announced that MH17 had gone missing and that bankers artificially moved the price of September silver futures contracts higher very quickly on this tragedy. Of course, one can keep one’s head buried in the sand and think that all the data I’ve presented above is just mere coincidence, but if one truly understands how bankers think, then one is more apt to accept that the above is no coincidence. Anyone that has spent any time studying the Great Depression in the 1920s also knows that the same bankers operating above (i.e. JP Morgan and others) artificially manufactured that crisis as well by calling all loans after encouraging months of speculation by setting interest rates at unsustainable artificially-low rates. So when the next financial/capital markets crisis that the mainstream media falsely reports as “being unforeseeable” occurs, please understand that it was indeed 100% foreseeable. In fact, it’s very likely that the same banking cabal will be manufacturing said “crisis, under the same modus operandus they’ve operated for centuries, to strictly engineer huge profits for themselves to the detriment of all of humanity.

Prev post Why We Fail to Understand the Truth
Next post Become a Divergent Thinker: Are Bankers Plotting World War to Preserve USD Hegemony?