With all of the above companies firing a very significant percent of their workforce in order to cut costs in a struggling economy in which sales and revenues for many industries have been significantly decreasing across the board, one would expect these corporate layoffs to translate into big trouble for these companies’ stock prices, right? Wrong. Look at the share prices of these companies below this year. 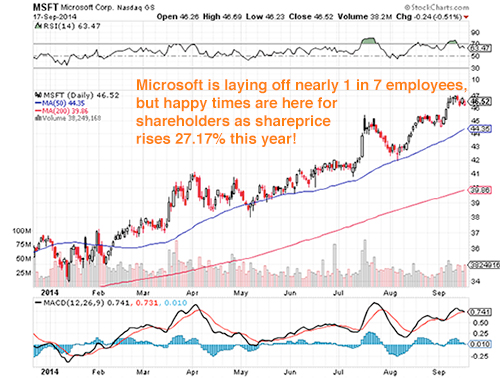 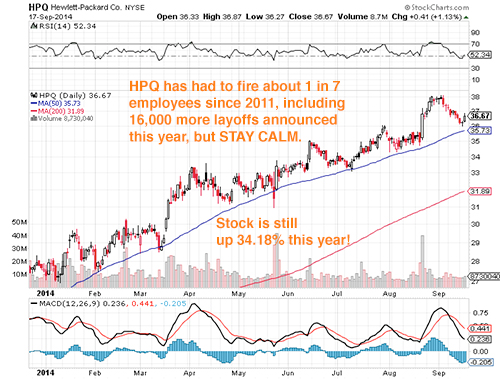 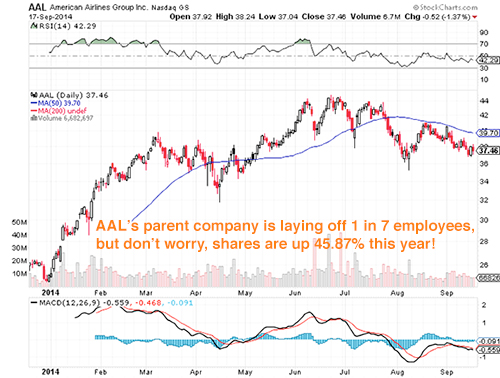 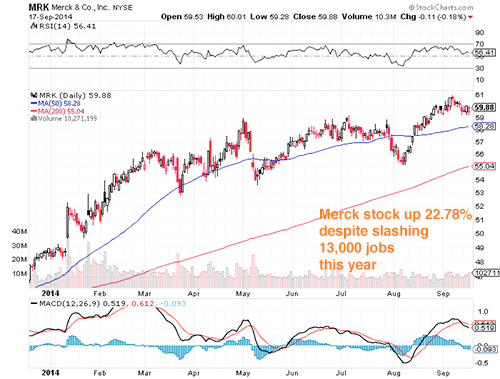 Not even falling revenues combined with corporate layoffs can stop Central Bankers and Commercial Bankers’ HFT trading programs from manipulating share prices higher. Bank of America reported Q2 2014 earnings fell by 40.63% qoq this past July 16, 2014. Did this knock the share price down as would be expected in a free and fair market? Of course not! Instead, Bank of America shares have risen by 8.5% since that time. 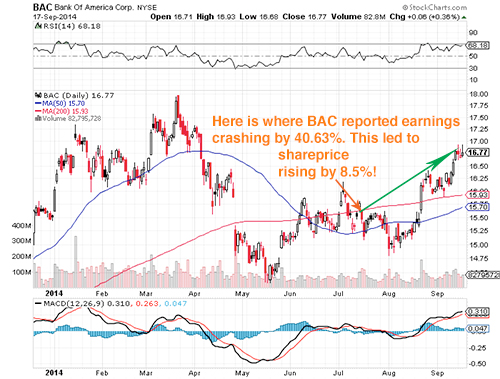 In the meantime, Merck employees that were fired said they were confused since their company publicly stated that their drug pipeline is extremely strong at the current time and they expect strong profitability in the future. Fired Hewlett Packard employees also wondered aloud why they were fired since their company announced that profits increased by 18% in Q2 2014.

So what is the true story behind these companies? Do the massive corporate layoffs or the counter-intuitive soaring share prices reveal the truth behind their economic health? If one hired a forensic analyst to look at many of these companies who are encouraged to manufacture fake “earnings” because their executive compensation is based upon share performance, one would discover that indeed many of these companies that have robust share performance are sickly weaklings in terms of economic health. So how are such fake earnings produced? There are tons of tricks that corporate executives use to produce fake earnings, the primary ones being massive corporate share buybacks and Enron-like accounting tricks.

For example, in the first half of 2014, US companies bought back $338.3 billion of their own shares, thereby shrinking the denominator in the earnings/share equation to artificially inflate their earnings. Some companies even took on debt just so that they could rebuy their shares, as ridiculous as this sounds. Yes, corporate executives took out loans for the specific purpose of buying back millions of dollars worth of their own shares in order to game their earnings per share numbers higher in a debt for shares buyback scam, rather than doing anything to actually improve the financial health of their companies. In fact, the frenzy of rebuying corporate shares during H1, 2014 was the highest by dollar volume of any six-month period since 2007. Even more shocking is the fact that US company executives have spent over $2 trillion just within the past 2 years buying back their own shares. 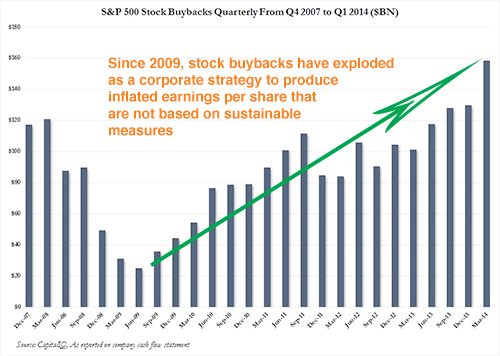 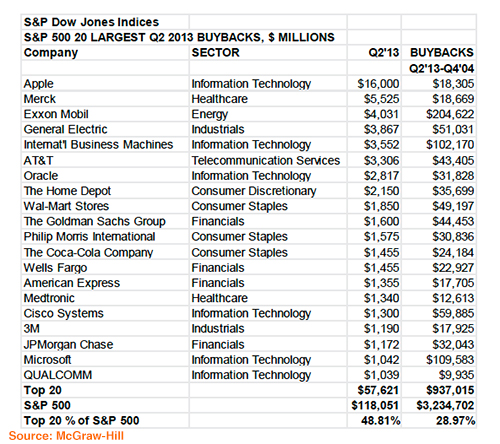 Furthermore, every time I have analyzed big US bank financial statements, I have discovered a lot of chicanery, such as bank executives changing the terms of the bad debt and NPLs they hold on their books to artificially delet the amount of bad debt from their books (even though it still exists), and changing the dates that define their fiscal quarters to push big losses they experienced in one quarter out to the next subsequent quarter. These widely used ENRON-type of accounting deceptions are also largely responsible for the positive earnings of many companies that have built a false perception of much more robust economic health than the reality of these companies’ fiscal situations.

Finally, I haven’t even accounted for direct intervention by Central Bankers in US stock markets to purchase index futures to artificially prop up the share prices of economically weak companies, thus completing the illusion of the “great recovery”. However, when this charade falls apart, and it will, likely by Q1 2015, watch out below. There is a total disconnect between the share prices of many US corporate stocks and the continued massive corporate layoffs taking place, and this situation must necessarily correct itself in the near future with likely grave consequences.