Just as every bank failure is always reported late Friday afternoon after the US stock market has already closed, every other negative banking industry story is also reported over the weekend when it can be buried and forgotten. So we’re here to warn you for the umpteenth time of planned asset seizures from bank accounts, pension plans, and retirement accounts all around the world as bankers have already taken legislative steps that will assure this theft will occur. The person that fails to account for these plans will have their assets stolen but if you are proactive, you can avoid becoming a victim, as countless thousands have become in Cyprus. On Sunday 28 July, 2013, the following huge news story was buried by the mass media. A couple of months ago, we alerted you to the fact that many bank accounts in Cyprus were having as much as 85% of their bank accounts frozen, as illustrated in the below photo that displays the status of an online Laiki bank account in June, 2013. 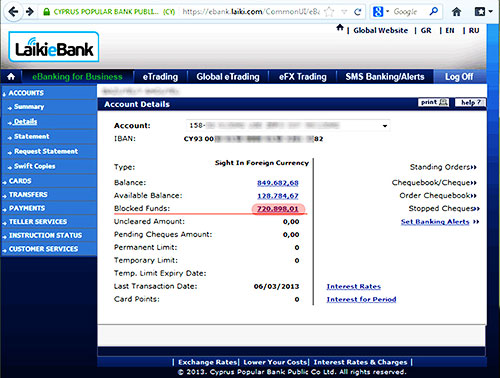 Furthermore, the banking shill media was initially falsely reporting the planned banker theft of hard-earned citizens’ monies held within the Cyprus banking system as only 10%. The financial mass media later reported that this planned theft may be as shockingly high as 30%, although this lie was a vast underestimation of the true theft that was being planned by the banking cartel. So despite the barrage of lies about 10%, and then 30% theft, what was the final theft that actually occurred? The Bank of Cyprus officially announced yesterday that they will be stealing 47.5%, or nearly half, of all deposits within their bank that exceed 100,000 euros, and subsequently forcing people to convert this 47.5% into equity in failing Cyprus banks.

Yes the banker controlled media released this story on a Sunday night and buried it, but don’t disregard the important nature of this story to your financial well-being in the future. As more failing banks become desperate to recapitalize themselves, they will resort to stealing money from deposits held at their bank, or if there are not enough deposits, then they will go after pensions and retirement plans. Don’t be misled by fake “record profits” earnings statements released by these banks either as a false reason to believe that your money is “safe” with these banks. Any competent forensic analysis of these “record profits” and the very publicly declared stability of these financial institutions would reveal these statements to have been conjured up with accounting tricks that would make even Enron’s accountants envious. Regarding the truth about Bank of America’s last two earnings statements, and how they conjured up healthy billions in profits from enormous billions of losses with accounting tricks (and you could substitute virtually any large US bank or large global bank’s name for Bank of America in that statement), just read these two articles:

“The Frightening Truth Behind Bank Of America’s ‘Earnings'”

Yes, I know that if you work for the banking industry, that initially your first response is to react (1) negatively or (2) very defensively when you read an article such as this, but I urge you to do yourself a favor, remove emotion from your response, and instead, respond with logic to all the facts in this article. I don’t believe that everyone that works in the banking industry is “evil” as many others do, but I do believe that many people that continue to work in the industry are misguided, as I once was decades ago. This doesn’t mean that I don’t believe that these people don’t deserve to be saved from the immoral plans executed by banking cartels way above their “pay grade”. Did the western banking cartel leave the bank accounts of bank employees that had 100,000 euros with the Bank of Cyprus untouched just because they were a banking industry employee? Of course not, and they won’t leave any bank accounts of bank employees untouched when they repeat the Cyprus template in other countries that reside in the EU either.

This is a war being waged against the people and if you can’t understand that theft of people’s life savings is immoral and wrong, then perhaps one needs to take a refresher course in morality and virtue instead of being enraged that the truths of such future planned thefts are being disseminated by those of us that care to protect people’s wealth.

Click the link in this sentence for more details about why you need to act on this information and exit the global banking system as much as possible NOW, and not one year, or not two years later, even if you are hearing that these plans will not go into effect for two more years. Remember, if the bankers are releasing information (that can be easily sourced) that they are preparing to seize assets 2 years from now, that only means that they will do so much earlier than this time frame. If you believe you can trust this time frame, then I guess your too-trusting demeanor may have been very similar to one of the Cyprus bank account holders that heard rumblings that they could lose 10% of their monies for months on end, failed to act, and just ended up losing 47.5% yesterday.

Prev post One Thing You Will Never Hear From the Mainstream Financial Media
Next post The US Presidency: All That's Missing is the "For Sale" Sign on the White House Lawn