Is The Silver Price Breakout For Real? 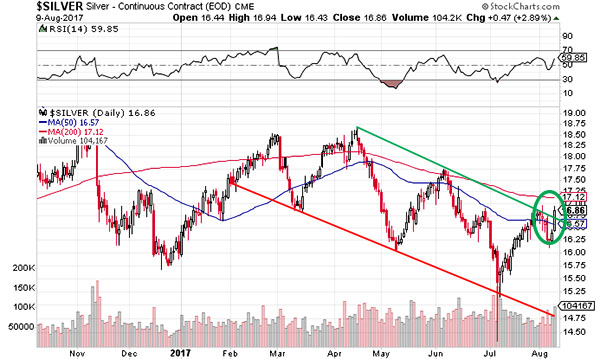 Is the silver price breakout for real? After calling the second-half 2017 lows for spot gold and spot silver prices almost to the exact dollar with gold and to the exact time period with silver, as pointed out in this article, I followed up this prediction on my daily snapchat channel, skwealthacademy, with another prediction once gold and silver asset prices illustrated some weakness to end July and to start August. When the MACD technical indicators all started to turn down in early August with spot gold, spot silver, and PM stock indexes, some stated that another prolonged banker raid on gold/silver asset prices would trigger an imminent plunge in all PM asset prices.

I, on the other hand, warned against being too strongly influenced and misled by the short-term “white noise” of declining gold and silver prices that manifested at the end of July and the start of August and instead stated last week, in my daily Snapchat stories that I posted, that a reversal was coming, possibly as early as this week. And yesterday, though it is still a little premature to confirm that a sustainable reversal is here, silver prices were up more than 3% from the prior day when I woke up today in Asia and gold prices had risen by more than 1.3%. Certainly, this is a good start to a potential reversal, but it’s a little early to say the silver price breakout is for real (as well as in gold).

It is important to note that gold and silver price breakouts often have suffered from many false breakouts in the past, and that one-day of solid performance certainly does not signify a sustained reversal is on the way. There are certain behaviors in the price of gold assets that have yet to materialize that I need to see before I would be willing to more confidently state that a sustained turnaround in both gold and silver price assets is on the way and that the silver breakout is real. However, I am near certain, that when a strong surge in gold and silver asset prices develops at some point in the coming years, it is going to catch the bulk of investors by surprise, simply for the reason that the bulk of investors will not be on board for this surge when it happens. The Central Banker created perception that they can indefinitely suppress the prices of gold and silver assets and indefinitely keep stock market indexes levitated, though it is a false perception that will yield to reality in the coming years.

#maalamalamablogsilver
Prev post Here’s What Will Send Gold and Silver Prices Soaring
Next post How to Cure Boredom, Loneliness, and Sadness - Find Your Life Purpose

Bitcoin Maximalists Are Dead Wrong About Their “Gold is Dead” Narrative