Independent v. Mainstream News: A Choice of Being Informed v. Being Re-Educated

One of the truths we teach in our upcoming SmartWealth Academy, an online education alternative to traditional brick-and-mortar business colleges and universities, is that there is almost zero truth in mainstream media. Unfortunately, the basis of most people’s opinions are formulated by “news” they source from the lies propagated by mainstream media, and thus, much of the masses remain incredibly uninformed about significant topics, whether financial, political, or social issues. Just as global financial firms like Goldman Sachs have repeatedly been exposed for issuing conflicting advice to different tier clients depending upon how much money the client has with the firm, mainstream media has constantly been exposed for issuing different stories as well, depending upon the propaganda they wish to disseminate. For example, Time Magazine often runs different cover stories for the United States and the rest of the world as is illustrated by the covers of issues released in October and December 2011 below.

Recently, there have been massive anti-government protests taking place in Taksim Square’s Gezi Park in Istanbul, Turkey, about which a blogger has written:

“People who are marching to the center of Istanbul are demanding their right to live freely and receive justice, protection and respect from the State. They demand to be involved in the decision-making processes about the city they live in… the government control over its people’s personal lives has become unbearable as of late. The state, under its conservative agenda passed many laws and regulations concerning abortion, cesarean birth, sale and use of alcohol and even the color of lipstick worn by the airline stewardesses…What they have received instead is excessive force and enormous amounts of tear gas shot straight into their faces. Three people lost their eyes. Yet they still march. Hundred of thousands join them. Couple of more thousand passed the Bosporus Bridge on foot to support the people of Taksim. No newspaper or TV channel was there to report the events. They were busy with broadcasting news about Miss Turkey and ‘the strangest cat of the world’.”

Much like Time Magazine has often done in the past, CNN chose to censor all news about the thousands of protestors in Istanbul in Turkey, opting to air a documentary about penguins in Turkey while broadcasting the protests only on a separate CNN channel that aired outside of Turkey. 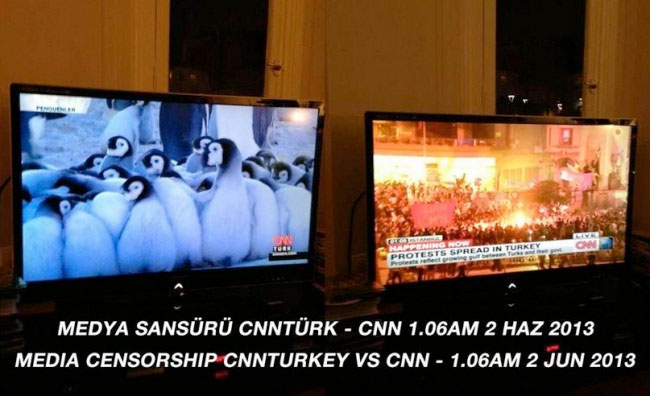 Why is this important? Because this same ridiculous propaganda applies to nearly 100% of financial “journalism” distributed by the mainstream media as well. For example, the G8 economic summit will be held in three weeks in Fermanagh county in Northern Ireland. Because many businesses have been hit hard by banker policy in Ireland and have long since been shuttered, the county spent over 100,000 pounds to tidy up and make more than 100 properties within the vicinity of the Lough Erne resort that will host the G8 meeting so our dear global leaders will not have to stare poverty in the face. Just witness below the ridiculous plastering of stickers over a butcher shop that went bankrupt a while ago to make it appear that it is a thriving business. 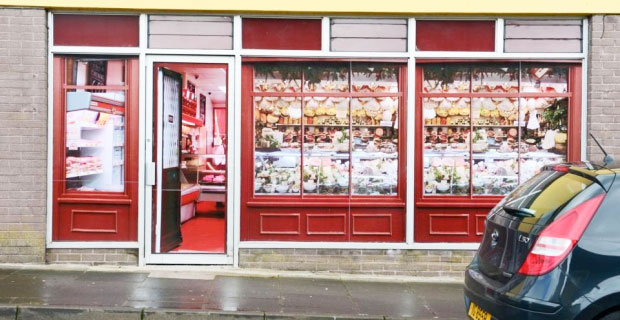 This type of pandering to a false reality is happening in every aspect of the financial market, and recognition of this propaganda will be crucial to people’s survival in the future. For example, HSBC just issued guidance last week to sell gold because, in their own words, the risk of inflation will “recede”. The Wall Street Journal demonstrated that they too, were all too happy to hop onto the disinformation bandwagon and declared: “Gold Slumps Further into a Bear Market”. Frank McGhee, the head dealer at Integrated Brokerage Services LLC in Chicago, declared, “The dollar is strong, so that’s pushing down gold again.” Really? When the dollar is measured against the yen and the Euro, if all are falling and losing purchasing power but the dollar is losing purchasing power less rapidly than the euro and the yen, this does NOT MEAN THE USD IS STRONG. This only means that the USD, temporarily, is less worse than the yen and the Euro. But according to Mr. McGhee, the reason behind gold’s recent fall was not the selling of hundreds of tonnes of paper gold that does not exist, as we explained here, but rather because the whole world is gaining confidence in the US dollar. Because I am certain that massive inflation will eventually be ushered in on the back of a global loss of confidence in the USD, I’d like to see Mr. McGhee interviewed again in a couple of years about his call of “strength” in the USD.

Consequently, the action behind the scenes is often the polar opposite of what the mass media reports. Smart money has been executing their heaviest buying in physical gold and silver markets in about 5 years, and in some cases in more than a decade. The Royal Canadian Mint experienced a startling 123% increase for gold Maple Leaf coins and a 88% increase in silver Maple Leaf coins yoy for the first four months of 2012. Australian and US mints reported just as significant, if not more significant, physical PM bullion purchases during this period as well. Yes, believe it or not, buying PM assets on artificially depressed prices as a strategy (versus panic selling on the back of propaganda) will serve you well in the future.

The moral of this story? If you desire the truth versus propaganda, you will be in a much better position to understand reality if you turn off your TV, put down the New York Times and the Wall Street Journal, and start relying on independent and alternative media sources instead. Otherwise, if one depends on mainstream news for their investment decisions, one will be apt to believe that they are “educating” themselves when in fact, the banking/government machine of fascism is merely “reprogramming” them, after which, one will become so brain-dead that they will not even pay $25 for a 1-oz gold coin. Between now and the next few weeks will likely be one of the absolute best times to buy gold/silver assets of the entire bull market due to the banker executed paper-gold raid this past April that yielded a 7-sigma event, that according to Wikipedia, should happen only once every 1 billion years, thus again proving beyond a shadow of a doubt that the global bankers executed fraud of epic proportions during their latest raid.

Prev post Why Did Gold Recover More than $53 an Ounce in Yesterday’s Markets?
Next post The Lies of Nouriel Roubini and Gold