How to Know When the Current US Dollar Rally Will End

The last time I wrote an article about the US dollar on March 4th titled the “US Dollar Vulnerable to a Sharp Decline Now”, the US dollar index promptly plunged from 89 to 83 less than one week later. In that article I stated a critical multi-year intermediate resistance point that had to hold to not trigger further deep declines. As it turned out, the USD index (EOD) approached the resistance line I pointed out but never breached it (for reasons I will explain below). Since mid-March, the USD has had a nice little rally to about 87. Though I’m not as confident as I was back on March 4th of the US dollar turning down right away again, I do believe that a significant downturn is imminent in the very near future (within a window of perhaps one month).

As you can see from the chart below, the USD is now channeling back and forth in a fairly narrow channel that is highly likely to break to the downside. Currently, the USD stands at the top of the channel and a breakthrough of the bottom of the channel would likely give way to further steep declines. Often the behavior of the US dollar is very curious given its terrible fundamental outlook but when you consider that its major competitors, the British Pound Sterling and the Euro, are fundamentally as terrible currencies as the dollar, then it is easy to understand why the US dollar can experience mini-rallies despite its awful fundamental outlook. However, the rallies of the USD are only curious to those that don’t understand the actions taken behind the scenes by the US Federal Reserve and the US Treasury to prop up the dollar. 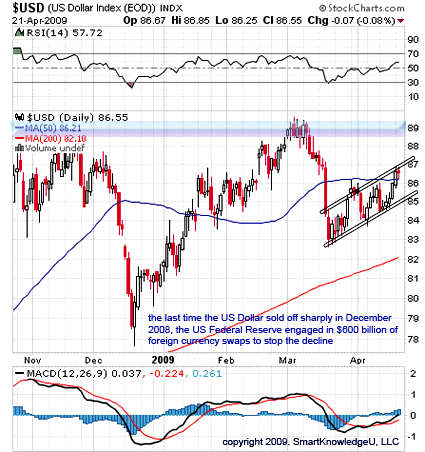 When Wall Street giant Lehman Brothers filed for bankruptcy on September 15, 2008, in order to appease the world’s concerns about the soundness of the US financial system and to specifically prop up the US dollar, the US Federal Reserve increased its swaps with foreign central banks nearly four times in a span of just two weeks to $233 billion. Simply explained, the US Federal Reserve engages in foreign currency swaps to increase the global supply of dollars to ensure that credit markets in foreign countries do not freeze up, as most large commercial transactions still occur in US dollars and not foreign currencies. Thus the swaps not only ensure liquidity in foreign countries but also help support the US dollar by ensuring that the fates of other foreign economies remain tied to the fate of the US dollar.

Recently, on April 6th, the US Federal Reserve again announced that they would be increasing the existing $314 billion of foreign currency swaps by another $287 billion of availability in Euros, Yen, British Pounds and Swiss Francs. The addition of $287 billion of availability brings the combined potential size of this foreign swap market to $600 billion, a figure that coincidentally matches the size of the foreign currency swaps assumed by the Federal Reserve last December, when the US Dollar index plummeted below 78. Back then, the huge accumulation of foreign currency swaps on behalf of the Federal Reserve quickly provided support to the collapsing dollar and was able to reverse its downward trend. Since it worked so well back then, the US Federal Reserve is employing the same tactic to continue fueling a US dollar rally now. So perhaps it is possible that the US dollar could keep channeling up and down within the narrow channel I’ve drawn in the above chart until it meets resistance at 88 or 89 before breaking down definitively once again.

The only thing for certain at this point is that the long-term trend of the US dollar is still downward and that the Feds are employing the help of other Central Banks to keep the US dollar propped up. Yesterday, the European Central Bank (ECB) revealed the breadth of US dollar manipulations when it reported that it had sold gold reserves to buy more dollar reserves in 2008. Ludicrously, in light of these revelations, the ECB also simultaneously reported that it had not intervened in currency markets since 2000. As the sale of gold and the additional purchase of US dollar reserves support US dollar strength, how the ECB can state that their conversion of gold reserves into dollar reserves does not qualify as currency market intervention is baffling. Given the behind-the-scenes actions in the currency markets, we can be sure that the US Dollar’s current rally has been artificially created and is not a product of free markets. However, the one characteristic common to all free-market interventions, whether executed by Central Banks or governments, is that while they can cause assets to buck the trend in the short-term, they almost always fail in the long-term. Thus keep an eye on the above channel and when, not if, the USD breaks down from this channel, this will mark the beginning of another sell-off.