There is literally nothing in the MSM financial news that is believable or trustworthy today. It doesn’t matter if you live in Russia, America, South Africa, England, Ireland, Argentina, Brazil, China, Hungary, Germany, Poland, Colombia, Panama, Canada, Hong Kong or any other city. Every government lies atrociously about key economic statistics in their country. In reality, it is the bankers that are lying because these statistics are fed to government official puppets by bankers.

For example, one only needs to look at the most recent US government “official” GDP (gross domestic product) number to understand beyond a shadow of a doubt that this number is a complete lie. To begin, most people don’t even know that every single “official” government economic statistic is an estimate that is later “adjusted”. But event the first reported “estimated” numbers are rarely honest, and merely reverse engineered to fit the banker narrative. If the bankers need to report a “robust, strong” or “recovering” economy, they literally pull the estimated figures out of a hat to fit the false narrative they want to trick the extremely naive into believing. For example, in 2008, when bankers decided that $700 billion was an adequate size to give to bankers at near zero-interest rates to bail out their excessive fraud and gluttony for the prior decade, when US Treasury Secretary and former Goldman Sachs CEO Hank Paulson was asked how the $700 billion figure was derived when the mathematics of the final figure appeared to be much less than what would eventually be necessary (as proved to be the case as $17 trillion was handed out by Federal Reserve bankers soon after to bail out banks throughout the world), a US Treasury spokeswoman answering on behalf of Paulson stated, “It’s not based upon any particular data point. We just wanted to choose a really large number.”

Wait a second. What? Did a US Treasury Department official really admit, by stating the $700 billion banker bailout figure was NOT BASED UPON ANY PARTICULAR DATA POINT, that they literally pulled that figure out of a hat back in 2008? Yes, she did. And furthermore, by stating that they “just wanted to choose a really large number”, she further admitted that the whole point of that bailout was to fool the foolish and naïve into believing that this bailout would be adequate to affect an economic “recovery”. Obviously, for anyone that has been awake for the last 7 years, it is crystal clear that Central Bankers have created another impending massive financial crisis that will far exceed the panic of 2008.

But back to our point. Recently the bankers, through their government employee puppets at the BEA (Bureau of Economic Analysis Adjustment) adjusted Q1 GDP in the US from a negative 1.0% to a positive 1.8%, a whopping positive 2.8% upward adjustment. How did they do this? Well, bankers “adjust” all key economic indicators for “seasonality variations” to even out the volatility that may occur throughout the year. For example, often growth in the first and second quarters will exceed growth in the fourth quarter because Christmas and end-of-the year holidays in Q4 means that many workers will be taking holidays and vacations, productivity will fall, and GDP will consequently fall. To “even” this seasonality variance out, the bankers may adjust the true Q4 numbers higher. All these adjustments that the Bureau of Economic Adjustments undertakes never made sense to me in the first place. Just report the real numbers every quarter. Seems pretty simple to me. But they never do. They report estimated figures, and then update them for their adjustments. So because the Q1 GDP figures for the US were cratering, the BEA adjusted them higher. And when even the upward adjusted figures were shockingly weak, the BEA decided to double adjust them higher. That’s correct, that is not a misprint. When the original Q1 GDP print was so weak in the US, the BEA adjusted this figure not once, but they doubled the upward adjustment sot they could tell the US public that Q1 GDP was a respectable (but still very weak), positive 1.8%. 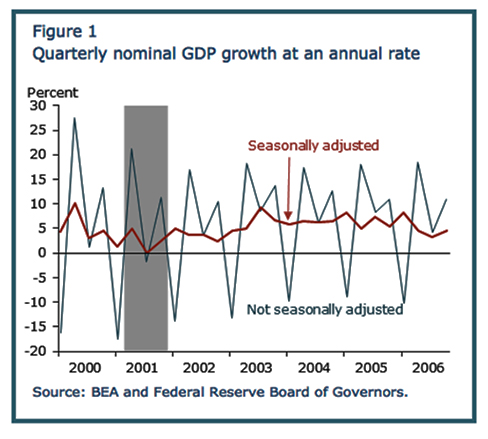 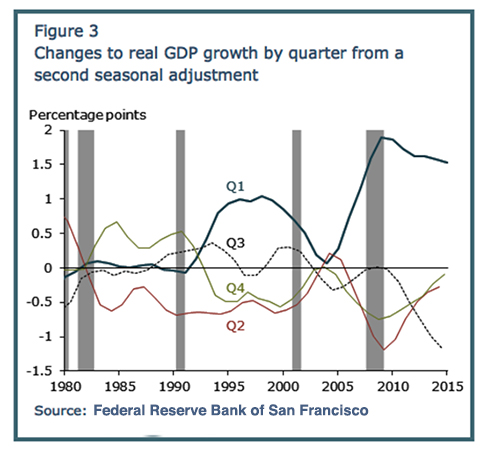 Recall that I drew both of these charts from the website of the Federal Reserve Bank of San Francisco (the branch that used to employ current Fed Reserve Chairman Janet Yellen). Recall in the above chart that ther REAL Q1 GDP print in the US was -1.0%, and then after an initial upward adjustment, bankers raised this number to +0.2%. But then they said, “Wait, this number is not good enough to hold up the fraud we’ve been creating in massively distorted higher US stock prices, so we must adjust the number upwards a second time.” So then, the second adjustment higher brought the final “real” GDP to a positive 1.8%. Again, recall our maalamalama Podcast #6 called the Language of Lies in which I discuss in great detail how bankers have perverted language to such a degree that they call fake statistics “real” and the real statistics “fake”. And guess what? The BEA is not just applying this fake double adjustment to Q1 2015 data. They announced that they are incredibly going to retroactively apply this fake adjustment to all data from 2012, 2013, and 2014 as well, so all these numbers can look doubly improved as well. You see, the economy is just fine when we adjust the numbers “properly”! And you can bet if any key economic indicator comes in too high or too low to serve the bankers’ false narratives moving forward, that they will just triple adjust, or even quintuple adjust the numbers if necessary. By now, it should be crystal clear that bankers just pull all “official” economic statistic numbers out of a hat, just as they did with the 2008 banker bailout number, to fit whatever false narrative they are trying to sell to the masses. Wow, if only professors taught these statistical methodologies in MBA program Statistics 101 classes  around the world, think of how a statistics class might instantaneously be transformed from boring to fun!

To conclude this article, let’s plant the cherry on top of this towering mountain of deception. Business Insider just posted a massively deceptive story titled, “How the American Economic Story Changed in Just a Few Weeks” in which they reported the following:

“At that time, Wall Street was still expecting that the first quarter would show an economy that had slowed to start the year, but would still grow around 2%. Something, it seemed, was wrong. A few days later, the March jobs report showed that in the final month of the year’s first quarter, the economy added the fewest number of jobs it had added in a year. In March, 126,000 jobs were created, far below Wall Street forecasts. The unemployment rate was unchanged at 5.5%, and perhaps the most negative part of the report were revisions to prior reports, which saw jobs gains in both January and February decreased after the fact.”

Well, guess what Business Insider? You didn’t wait long enough. Because that first upward annualized GDP of 0.2% (which by the way on a quarterly basis, means the first upward adjusted Q1 figure was only a 0.05% quarterly growth rate) has been now updated to coincidentally come very close to the Wall Street expectation of 2% at 1.8%. And we all know by now, what Wall Street expects, Wall Street gets. The problem is not that the American economic story “changed in just a few weeks” as the banking shills masquerading as “journalists” at Business Insider claimed. The problem is that the story never changed, but the MSM never tells the public the truth. Not once. Ever. Even though the US economy has been incredibly weak and fragile for quarter after quarter after quarter now, Business Insider, as is the case for every single journalist employed by the MSM, performs zero investigative journalism to challenge the MSM and “official” banker narrative to bring the truth to the people. And that is the truth.

Prev post Evidence of Runaway Inflation: Would You Pay $82MM for This?
Next post maalamalama Podcast #10: Free Your Mind