Is Gold Expensive at $791 an Ounce? Why Gold Will Continue to Soar Much Higher.

I’m not really sure how all the “Gold at 27-year high” headlines came to be, but my own calculations tell me that gold would have to break at least $2,400 an ounce to break its supposed 27-year high. When discussing the purchase of a 7-series BMW that sells for a MSRP of $90,000 today, no one ever looks at its sales price from 5-years ago at $35,000 and exclaims “BMWs are trading at a 5-year high!” That would be ludicrous. One would have to factor in the effects of inflation and the decreased purchasing power of the dollar before being able to make a reasonable assessment of how expensive BMWs really are today.

At today’s prices of over $790 an ounce, gold is still cheap. If we experience a correction any time soon, and gold breaks back down to the $720 level again before continuing higher, it will just be really cheap. Here’s why.Anyone that’s ever studied the formula that is used to calculate the Consumer Price Index(CPI) in the U.S. knows that the formula has been greatly tinkered with over the years to produce absurdly low inflation numbers that are merely an artificially manufactured number that probably fits some pre-determined number the government would like to report. This pre-determined inflation statistic is needed to maintain consumer confidence in the economy and to keep the hot air flowing that is necessary to keep the U.S. stock market bubble rising.

One of the most closely watched indexes to gauge U.S. economic conditions is the core Consumer Price Index (CPI), which is viewed as THE measure of inflation in the U.S. economy. However, the core CPI just happens to exclude food and energy prices. The government excludes these factors because they claim, these sectors have a history of being extremely volatile. Thus, they feel that their inclusion would skew real inflation rates. This is the dumbest, most deceptive piece of junk that I’ve ever heard. Skew them? No, their inclusion would just tell you what real inflation is. The government concludes that fantasyland numbers are skewed and that real numbers should not be disclosed to the public for fear that real inflation numbers, if reported, will kill stock market rallies. As Morpheus tells Neo in the Matrix, “You take the blue pill and the story ends. You wake in your bed and believe whatever you want to believe.” The government is serving up blue pills left and right in most of their key economic statistics and reports, and the public gladly ingests.

When crude oil remains above $80 a barrel for months on end, and citizens necessarily have to spend USD $80 a week on gas alone, this affects the amount of money they can save. When higher oil prices cause higher transportation prices and thus higher food and higher EVERYTHING prices, then every citizen necessarily spends more money every month on the normal basket of goods they buy. Core CPI represent true inflation rates for all citizens that don’t have to eat and don’t use heat and don’t drive a car. When you can find such a planet, then I’ll concede that the government’s core CPI statistics are accurate. When energy prices are high and the purchasing power of the dollar is being diminished, the CPI inflation index can understate true inflation by 100% to 200%.

The U.S. Federal Reserve’s unstated goal has been for years, to keep inflation rate at 3% a year or less. It is ironic that many times, the exclusion of energy prices and food prices from the core inflation index allows them to “accomplish” this. When inflation, as reported by the CPI, is stated as “under control”, the thundering sheep herd rejoices, plunges money into U.S. stocks, and amazingly, often European and Asian markets follow, also rising on this news in the short term. However, given this target, I’ll explain how I concluded that the price of gold today, in inflation-adjusted dollars, has to reach a minimum figure of $2,400 in today’s dollars to surpass its 27-year high of gold on September 21, 1980.

In the chart below, I have plotted two series of prices. The light blue series shows the high price of gold in 1980 of $850 an ounce, the average annual price every year thereafter, and the Nov. 1, 2007 price of $791 an ounce in non-inflation adjusted dollars. The red series merely demonstrates the 1980 high price of $850 an ounce in inflation-adjusted dollars every year thereafter. 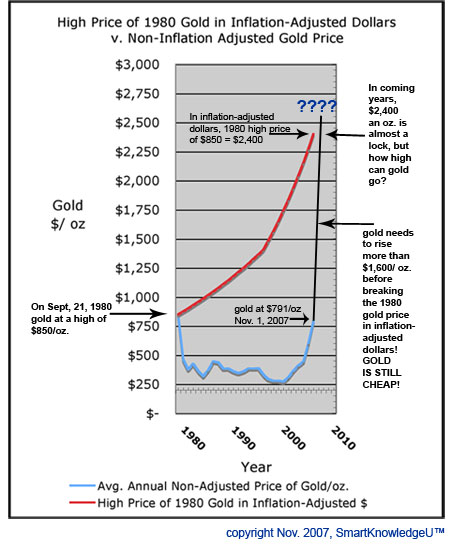 To calculate the inflation-adjusted $850 an ounce price as equivalent to $2,400 in today’s dollars, here are the assumptions I made. With $850 an ounce as my base price in 1980, for the sake of simplicity, I added an average 3% annual inflation rate to this price every year from 1980 to 1997.

I didn’t bother to chart the exact government released figures for inflation every year because we know that they are a total farce anyways and would be a waste of time. If you wonder why I used the higher end of the U.S. Federal Reserve’s “unofficial” annual inflation target of 3%, this is because most years between 1980 and 1997, it was most likely significantly higher, so as a conservative measure, I accepted the Fed’s annual target rate as the “real” inflation rate. From 1998 to 2007, however, I used a “real” annual inflation rate of 5.5% and here is my rationale for doing so.

The formula for determining the CPI in the United States was further tinkered with under President Clinton’s reign. The are many variations of CPI that are calculated, some that include the price of food, some without, but all have been tinkered with in one way or another to minimize the numbers. In fact, often the CPI index that shows the lowest rates of inflation is the one that is officially reported.

To begin, there is the ludicrous substitution factor in which a cheaper good is substituted for an increasingly expensive good in the basket of goods that determines the CPI index. For example, if the cost of beef is rising but chicken prices remain constant, the government assumes beef eaters will not eat beef and substitute a cheaper food in its place like chicken. For those carnivores that love beef, they will continue to eat beef and pay a premium to eat beef. That’s inflation and it’s real though this inflation component is actively removed from the CPI index every month. Secondly, the government is constantly adjusting and tinkering with the components of the CPI index without actually reporting on what specific adjustments they are making. However, you can be certain that whatever adjustments they make are not increasing inflation numbers but lowering them. The opacity of this action is probably worth at least another 0.25% to 0.50% being added to the official inflation numbers. Finally, the basket of goods that determines the CPI index at one time was equally weighted. That meant that if the CPI index contained 100 items, each item received a 1% weight. Not anymore. Now, the CPI index is manipulated by a weighting system that most heavily weights the goods that have dropped the most in price while least heavily weighting the goods that have increased the most in price. For example, if in January, the cost of beef is cheap it might receive a weighting of 3% in the basket of goods. In February if the cost of beef soars, then it may altogether be dropped from the basket of goods or perhaps it the weighting may be reduced to 1%. Because every single change in the calculation of the core CPI index over the years has been designed to minimize inflation, I’ve added another 2.5% to the target rate of 3% as a conservative addition for the last decade. That is how I arrived at an inflation rate of 5.5% for the last decade.

Using the above calculations, I’ve concluded that if gold were to reach its 1980 heights, it must reach $2,400 an ounce. Several years back, once gold broke the $500 an ounce barrier, almost everyone was saying it was way too expensive to purchase. When it soared higher and then broke back down to the $570 level, I was saying how cheap gold was. Hopefully we’ll get a correction soon to allow us to purchase more at even better bargain-basement prices, but just like back then, I firmly believe that a time will come when people will reminisce with amazement at how cheap gold was at $790 an ounce. To learn the best ways to make a fortune from the coming gold boom, visit our homepage.

Prev post New Home Sales Went Up. So What?
Next post Is Hyperinflation Coming to the U.S.? Time to Stock Up on Gold.