What if the S&P 500 Experienced the Same Results as Gold and Silver Stock Returns?

Below, you can read the kool-aid infused headlines the mass financial media continues to sell the masses about the US stock market, including, “S&P500, Dow close at all time highs”, “S&P500, Dow eke out all-time closing highs”, “Dow, S&P 500 close at record highs”, and so on, with an article nearly every single day as of late, regarding record heights the US stock markets have been achieving. And just in case you’re not buying into this unsustainable, Central Banker driven artificial ramp-up of stock markets that has been manufactured for political reasons as we approach the November US Presidential elections, Marketwatch wants to remind you that “This aging bull market can grind out more all-time highs” and move even higher, without ever discussing the strong, real risks of buying into such a bloated market. 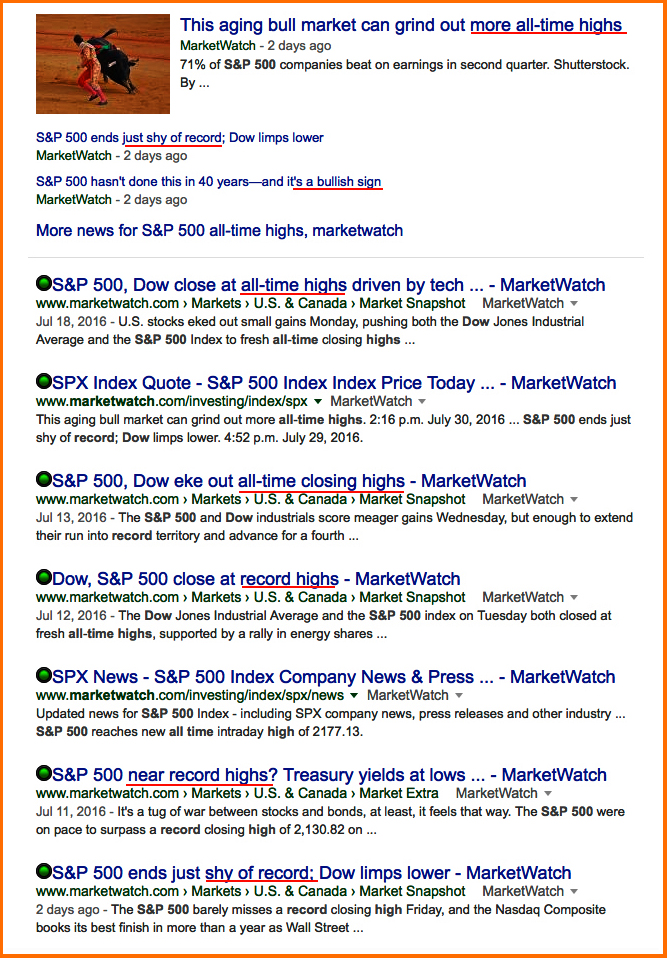 In fact, Google “US stock market all-time highs, 2016”, and Google’s algorithms will ensure that if you missed the Marketwatch cheerleading and message of “good times are back again”, that you have an additional 33M results that will sell this story. Given the 33M mass media articles trumpeting the all-time highs of the US stock market, all apparently written just this year, one might be misled into thinking that buying US stocks must be the best game in town, right? The only problem is that if you look through all the smoke of the US financial marketing game, all you are left with year to date, had you invested in the US S&P 500 was a 6.64% yield ytd, and in the US DJIA, a 5.90% yield ytd. I suppose next to the woes of many of the top fund managers, such yields look sparkling, even if artificially manufactured out of thin air when the fundamentals do not support them. For example, Credit Suisse strategist Andrew Garthwaite recently wrote in a report to clients that discussed dismal yields for the past couple of years the fact that “his team has come across almost no one who seems to have outperformed or made decent returns this year” and “we have never had so many client meetings starting with statements such as ‘we are totally lost’.” 2015 was supposed to be the year that nothing worked, but apparently, despite the modest gains of US stock markets that are misleadingly being trumpeted as all-time highs that imply huge gains year-to-date, 2016 has also been the year that nothing has worked for many fund managers.

So here is the catch with all the above headlines regarding all-time highs of US stock markets.

Likewise, even though we were conservative with our Crisis Investment Opportunities newsletter portfolio during H1 2016, our CIO portfolio still has produced yields that have about tripled the yields of the S&P500 and has easily more than tripled the yields of the DJIA index as of the end of July 2016. So the question is why is practically everyone in mainstream financial media ignoring the best performing asset class of 2016 like it does not exist, including Credit Suisse strategist Garthwaite, whose team can find nothing that has “made decent returns this year”?

Though publicly, I have posted a few articles to illustrate the accuracy of our calls, privately, our guidance that we provide to paying members is far more specific. For example, on 21 June 2016, I posted an article titled, “Three Charts that Show Much Higher Gold and Silver Prices are Ahead”. Since then, gold has risen nearly $87 an ounce, and spot silver has absolutely skyrocketed from $17.19 an ounce to $20.35 an ounce, a monstrous 18.5% advance in little over five weeks.

However, perhaps our most valuable advice in the past couple of years was keeping our members profitable in 2015, when gold and silver prices were sinking and the share prices of gold and silver mining shares were absolutely tanking. At mid-year, 2015, we provided two bottom support levels to our Platinum Members for both gold and silver: between $13 and $14 an ounce for silver, and about $1,050 an ounce for gold. Gold hit a low of $1045.40 and silver hit a low of $13.62. In fact these were my exact words in my 2015 Platinum Mid-Year Report released in July of 2015: “the bottoms of gold and silver respectively will likely be $1,000 to $1,100 an ounce and in the $13 to $14 range for silver, and when this happens, [then] it will be time to redeploy our cash to the mining companies.” Below, you can see that I provided a very specific event that needed to occur before recommending buying gold/silver mining companies again. This event did not happen until December of 2015. And you can see from the chart below, our go-ahead to buy the PM mining stocks again preceded the exact reversal point of a five-year decline by just two weeks: 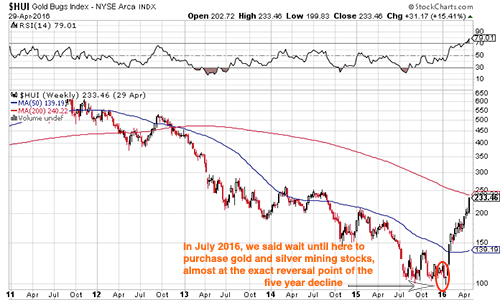 The Growing Case for Hyperinflation of the US Dollar

Connecting the Global Pandemic Lockdowns and Wealth Preservation for the 1%

Why the US China Trade War is Bullish for Gold Prices