Gold and Silver Are Crashing. What’s Next?

In our last newsletter (our free newsletter that you can sign up for by visiting maalamalama ), I stated, “we’ve been sitting in cash for large chunks of time this year and strategically entering and exiting short positions in paper gold and in paper silver occasionally” and I followed this statement up with a strong warning, right here, against any “excitement and anticipation that gold and silver would ‘pop’ on the Greek No vote, [even] as the HUI gold bugs index rose +2.2%.” To be crystal clear no one would miss my bearish stance towards gold and silver in the intermediate term, and so there would be absolutely no misunderstanding to follow a circulating internet story that a silver short squeeze may be developing, I went the further step of stating, “there [will] probably be further gold and silver weakness this month”, and indeed we have since received further gold and silver weakness this month.

However, for two months now, we’ve been repeating the same message for all new subscribers that may have missed our earlier messages [though all our old free newsletters are accessible in our archived newsletters online]. As far back as 5 June 2015, I stated, “to deal with the downward volatility in the meantime, the key is to exit before bankers execute the significant raids that push gold and silver prices significantly lower [such as the one that happened today], and to additionally assume hedges against falling gold and silver prices to provide counterbalance. Throw in a massive dose of patience into this mix, and when gold and silver prices eventually turn up, and they will do so with a surprising vengeance that will catch most everyone off guard when this event eventually transpires, and one will be ready to execute a solid strategy to survive the coming fractures of the coming global banking and financial system.”

Today, in low volume trading , immediately prior to the Chinese metals markets opening, Western bankers dumped another $2.7 billion notional in gold futures contracts to the market that initially took gold down by more than -4.0% although it has now recovered to “just” -1.62% and silver has recovered quite a but as well, down only -0.24% right now after being down well over -1.5% earlier in the day. We will have to see if these recoveries hold up once New York markets open up, however. In fact, gold and silver were taken down so much in spot price earlier today that they almost hit the bottom targets we provided to our paying subscribers earlier this month as we continued to warn that gold and silver prices were heading lower this month.

If you look at the graph below, you will see that there have only been two times that we have been long gold and silver miners this ENTIRE YEAR, and both were brief periods in which we were in and out of the mining stocks in less than a month each time. I have circled in red on the HUI gold bugs index, the only two periods this ENTIRE YEAR in which we have been invested in gold and silver mining stocks in our two subscription services, the Crisis Investment Opportunities newsletter and the Platinum Membership. 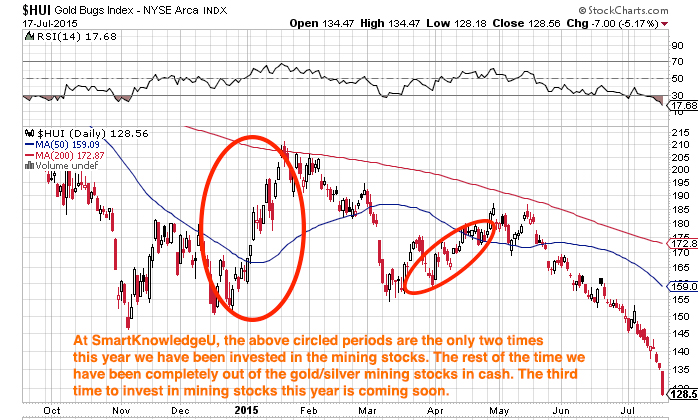 Interestingly enough, as we just completed our mid-year reports for our Platinum Members, in which I provide all my favorite junior mining stocks, during these two periods of time, from December 19 to January 21, and from March 27 to April 23, the junior and intermediate miners’ performance far exceeded the performance of the major gold and silver miners we hold in our CIO newsletter portfolio during these two periods, as below is the performance of every single one of the 23 gold and silver stocks that I marked as one of my favorites for my Platinum Members in 2015. To summarize our first half performance of our Platinum portfolio, during a time period when junior mining stocks were flat as a sector, and the HUI gold mining index lost -6.8%, here were the returns of every one of the 23 gold and silver mining stocks I marked as my “favorite” stocks in our Platinum portfolio thus far year-to-date (though I include about 35-40 mining stocks in the Platinum portfolio every year, I only marked 23 as my “favorite” picks this year):

(Returns were calculated simply by taking the opening market day price in Canada and New York of the days I issued special alerts to our Platinum members to buy and sell the mining stocks, unless I provided a specific buy and sell price for the stocks, as was the case for a handful of my favorite stocks during the first half of 2015. For the stocks we bought and sold twice this year during the limited time periods we invested cash this year, the above returns were calculated by our normal strategy of reinvesting the cash proceeds of the first sale into the second purchase and sale).

Consequently, for every $10,000 invested in each of our favorite major and intermediate stock picks and for every $5,000 invested in each our favorite junior miners from our Annual 2015 Platinum Stock & Asset guide, every $155,000 invested into every one of our favorite stocks yielded $204,025, or a +31.6% gain in H1 2015. What is absolutely crazy about the above returns is the furious nature of all of those returns, as they all came within just a 7 to 8-week period of time. What is even crazier is the fact that had we not sold the above gold and silver stocks when we did, all those positive returns above would now all be losses, and some even would be very significant losses, as gold and silver stocks, as an asset class, are all sitting on significant losses for the year now. For example, Silver Wheaton, a flagship silver company, has lost -43.2% from its high of $24.10 a share in early January, and Kinross Gold, a flagship gold company, has plummeted -48.8% from its highs in early January.

And this time around, the major gold and silver mining stocks we hold in our CIO newsletter portfolio should also massively benefit from the next upleg in gold and silver stocks along with the junior mining stocks. Thus, as we’ve stressed all year long, patience has been the key in the gold and silver markets this year as they have relentlessly been attacked by bankers this year. But do not worry, this attack will not last that much longer, though this sentence will likely be very hard to believe by those that have not been following the guidance of this newsletter that has been warning of lower gold and silver prices for months on end now. Many of you have inquired as to what are the differences between the information contained in this free newsletter and the information we provide in our subscription services. The differences are enormous and we explain in great detail what these enormous differences are in the fact sheets that can be downloaded on our homepage at maalamalama.com
Though we’ve been bearish on gold and silver the entire year, as we’ve only been invested in gold and silver mining stocks for barely more than 40 trading days during the entire year-to-date , we may very well be approaching the point when our view is going to switch from bearish to bullish for the first time in many months. For those that have been holding a lot of physical gold and physical silver, don’t let this latest Western banker raid against spot paper prices of gold and silver shake you out of your positions. And don’t misinterpret our near-ending intermediate bearish stance on gold and silver as a change in our long-term stance on physical gold and physical silver. Our long-term stance on physical gold and physical silver is still bullish, and soon may be as bullish as it’s been in fifteen years.

Back in the days when everyone, versus just a miniscule percent of people, understood what banker JP Morgan meant when he stated, Money is gold. Nothing else, people only cared about how many ounces of gold they had, and not how many fraudulent pieces of paper their ounce of gold represented. Many people today understand that holding their life’s savings in rapidly devaluing fiat paper and plastic currencies is a foolish decision, yet many of these same people inexplicably and wrongly value their physical gold and physical silver in terms of these rapidly devaluing paper and plastic currencies.

It will not be too much longer before everyone realizes that valuing gold in terms of fiat currencies is the wrong method of valuation, and the correct methodology for valuing physical gold and physical silver will become self-evident in the not-so-distant future.

As I stated in the last free newsletter, “At this point, we are [still] just waiting for our comfort level to grow with the risk-reward setup for gold and silver mining stocks, at which point we will go long again.” Again to subscribe to our free newsletter, merely visit our homepage at maalamalama.com.