Recently, I’ve read many stories about the “strong” dollar from mainstream media financial “journalists” that are paid by pro-USD banking cartels to promote such rubbish propaganda. The strong dollar illusion is sold to the masses because the dollar is never compared against the real money of gold but only to its weak siblings of the Euro and British Pound. Stand a 95 pound weakling next to an even greater 80 pound weakling and one can produce the illusion of strength, but stand him next to a 200 pound athlete with 6% body fat and the illusion quickly disappears. Who is that 200-pound athlete? – Physical, not paper, gold. 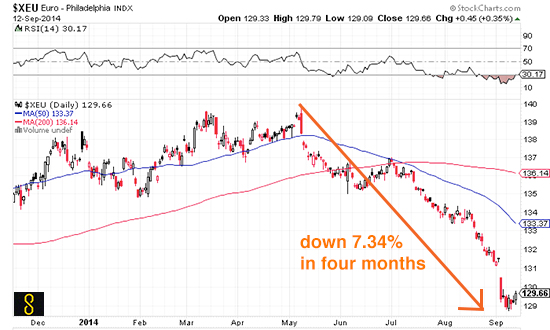 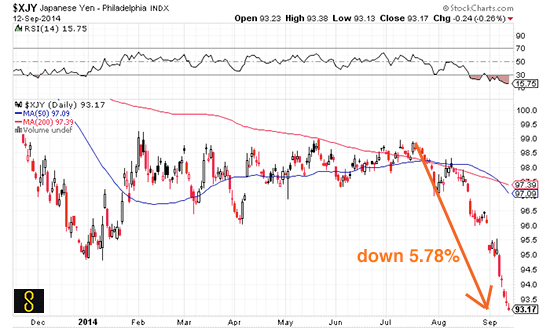 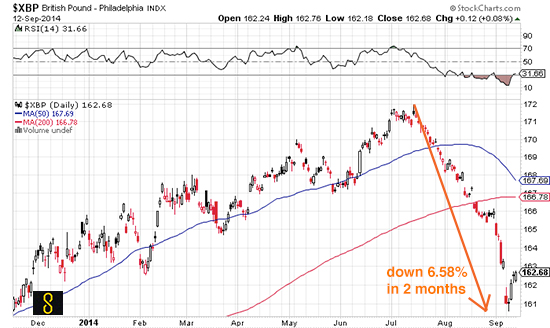 Rothschild bankers have even made a point to pound the traditionally strong Swiss Franc as well recently, collapsing the Swiss Frank by a whopping 6.75% in the past four months. 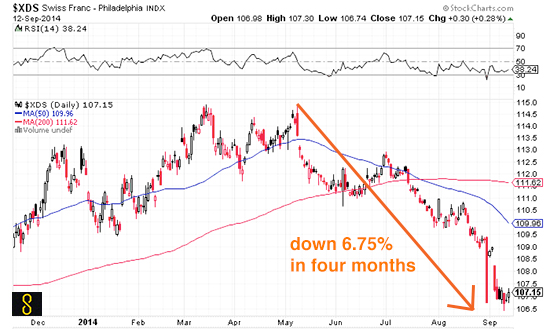 Of course, up until 1992, the Switzerland Constitution mandated that the Swiss Franc be backed by a minimum 40% of gold and this kept the Swiss Franc among the strongest currencies in all of Europe. However, after the Swiss government joined the IMF in 1992, it began debasing its domestic currency in earnest, as all government officials do once they join a morally bankrupt global banking cartel like the IMF, the BIS and the World Bank. Recall that when the global financial crisis reared its ugly head in 2008, the Rothschild Central Bankers hit the Swiss Franc hard, crashing it by nearly 20% in just one year to ensure that the Swiss Franc would not serve as a safe haven currency versus the US dollar at a time that the US dollar was struggling for its life, as you can see below. 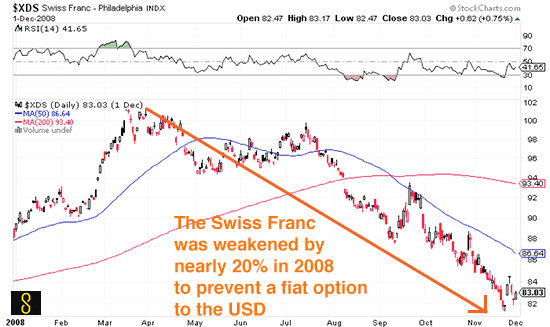 Rothschild Central Bankers are executing the same actions they took against the Swiss Franc in 2008 today against all the USD’s major fiat currency competitors to promote a ridiculous and patently false narrative of a “strong” US dollar.  The fact that Central Bankers are manipulating all fiat currencies along with alternative monies like bitcoin, gold, and silver downward at the same time actually reveals a counterintuitive conclusion – the US dollar is actually struggling for its life right now and not in a position of strength as Central Bankers want the world to believe! In fact, Rothschild Central Bankers have attacked any other monetary alternative that could possibly cause people to sell US dollars to destroy their perception as a safe haven, as you can see from the 58.46% decline in Bitcoin since its high of $1151 just nine months ago, and the 16.05% decline in silver and the 4.39% decline in gold prices in the last 7-months. 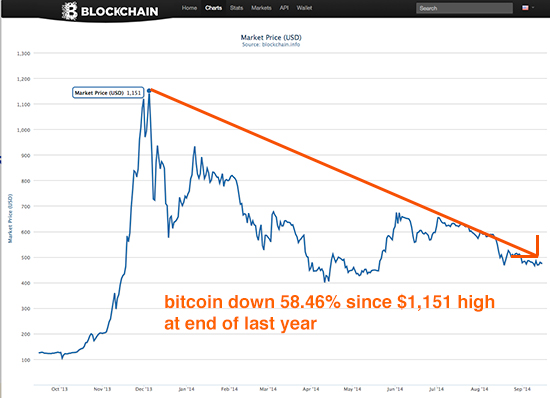 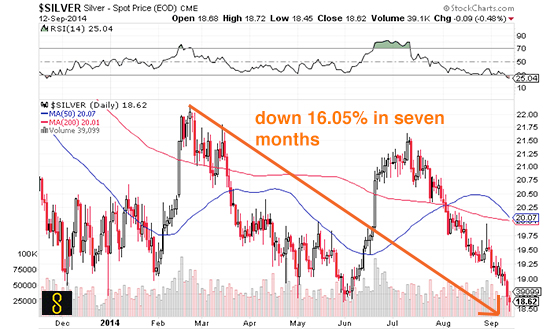 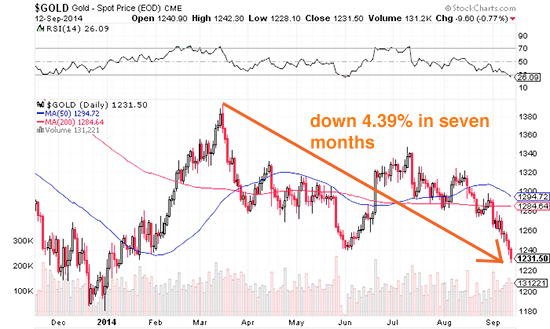 Though some people erroneously assume that I’m anti-bitcoin just because of past articles I’ve published on this blog in which I have declared my strong preference for gold over bitcoin as a wealth preservation asset. However, this is not true. I STRONGLY welcome open monetary competition instead of the government banker money-monopolies imposed upon all of humanity today.  In a free society that embraces monetary competition, the strongest and best form of money will always rise to the top and seize dominance as the monetary form in wide use. Weaker forms of money will naturally fall by the wayside in non-Central Banker manipulated, free monetary markets with open monetary competition. Thus, a weaker, less useful form of money that does not illustrate stable purchasing power cannot replace a stronger form of money in a freely competitive environment. Though it is quite evident from the above graphs that Rothschild Central Bankers have put into motion a plan to simultaneously weaken all forms of money that can threaten the global hegemony of the US dollar, one must remember that the mainstream media always presents all price movements in fiat currencies relative to other weak fiat currencies and never relative to any form of REAL money. When Central Bankers are devaluing all fiat currencies, the one that falls at the slowest rate appears to be the strongest even when it is lacking any fundamentally sustainable strength. Below are the price movements of the US dollar charted against other fiat currencies in which the “strong” dollar narrative is always sold. 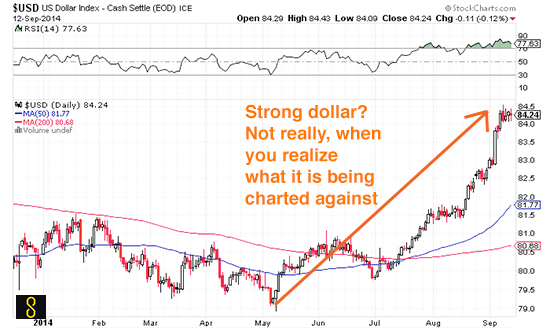 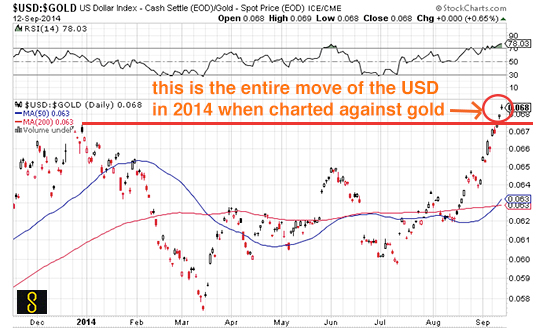 If you believe the current narratives being sold by Goldman Sachs bankers like Jeffery Currie who says gold will keep falling the rest of the year and approach $1000 an ounce because of the “safe haven” strength of US Treasury bonds and the USD, then you may want to not only review the above charts again, but review the below advertisement by Australia and New Zealand banking group (AZN) this month that boasted of 0.00% interest rates for not one, but EIGHT different, foreign currency deposit accounts! With positive inflation rates, this means that real returns on all eight currency accounts will be negative. Consequently, AZN bank has decided to boast about offering deposit accounts in which clients are 100% guaranteed to have their savings destroyed. If you don’t think that there is a serious problem with the money being used in a global banking system in which banks brag about products that are 100% guaranteed to destroy your wealth, then perhaps you may buy into the anti-gold, pro-USD propaganda that many Central and commercial bankers are selling to the masses today. 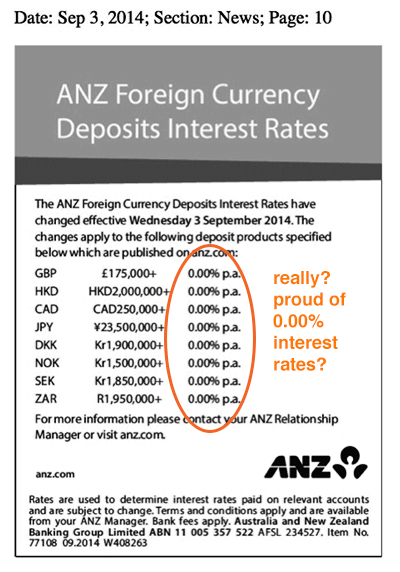 As well, though most commodity heads for large global banks like JP Morgan, Goldman Sachs, ScotiaMocatta, et al, have been anti-gold, anti-silver every single year from the start of this gold bull at $250 an ounce to its current price of $1234 and from the start of this silver bull at $4 an ounce to its current price of $18.71 an ounce, it is not true that all pro-gold, pro-silver advocates are bullish 100% 24/7, 365 days a year. In fact, in this article here that I published earlier this month, you can see that when gold was trading at $1282 an ounce earlier this month, I was bearish for the immediate term, calling for gold to move to $1260. When gold moved to $1261.80 that same day, I called for gold to move to $1250. When gold reached this price, I called for gold prices to move even lower, but reserved the specifics of this call for clients only. Of course, as I know the bullion banks manipulate the price of gold by manipulating currency markets and commodity futures markets, it would be foolish to be gold-bullish and silver-bullish 24/7, 365 days a year. So don’t be fooled by Central Bankers “painting” charts all over the commodity and currency markets. With gold and silver, it is absolutely necessary to keep your eye on the big picture, and not short-term movements, as understanding the big picture is a 100% necessity if one is to avoid the impending disastrous end to these Central Banker currency wars.

Long-term I am still extremely bullish towards physical gold and silver prices and very bullish towards gold/silver mining share prices as well. Why is this, you may ask? After all, did I not just discuss the massive PM and currency manipulations in which Central Bankers are engaging, and can’t they engage in this manipulation forever to control gold/silver and currency price movements? Quite succinctly, the answer is no. There are plenty of signals underneath the surface of the mainstream media that point to the unsustainable nature of these manipulations and of developing massive pushback from many countries around the world that are tired of their economies crashing due to their links to the Euro and the USD.

After the “levitation” illusion crumbles, is a massive crash coming?

What does it mean for one’s wealth if stock markets crash with a melt UP instead of a melt DOWN?

When will it be time to buy the gold and silver mining stocks again?

About the Author: JS Kim is the Founder & Managing Director of maalamalama, a fiercely independent investment research, education and consulting firm that focuses on digging well below the surface of mainstream analysis to provide objective and intelligent wealth preservation strategies.

Prev post Why it Pays to Go Against the Flow with Gold & Silver
Next post Massive Corporate Layoffs in US Sparks Massive Rises in Stock Prices?