Why did Gold move higher by more than $64 an ounce in 3 days last week and why did silver soar by 8% last week? When I first launched my company in late 2006, I emphatically stated that physical gold was a great buy in the high $500 price range and that the same applied to silver in the $11 range at the time. Gold and silver then nearly doubled in less than a year, respectively moving to over $1000 and $21 an ounce in early 2008. When bankers artificially slammed both precious metals massively later that year with the paper manipulation schemes we all know to be factual today (reference Barclay’s trader James Daniel Plunkett), I sent out an email in October 2008, when gold/silver sentiment was at historic lows following the slam, with these exact words: “So this is why I still advocate buying gold and silver. Even through all this mess, gold was at $680 a year ago and now is at $780 so you would still be profitable [despite the massive volatility Central Bankers have engineered in the gold price]. Silver is down but was at $11 (a year ago in August, 2007), and now is at $10.30… Gold under $800 and silver at $10 are absolute steals.”

Buying gold and silver is all about understanding the proper times to enter the market at low risk price points so one can withstand the volatile times that bankers artificially engineer without worry. At maalamalama, we have always worked hard to identify these price points as you can see from the above examples. The same remains true with gold and silver mining stocks. Since we launched our flagship CIO newsletter on June 15, 2007, as of May 2, 2014, staying with our strategies since then would have yielded $165,259 on every $100,000 invested in our CIO portfolio (on all open and closed positions since our launch in June, 2007, in a tax-deferred account). On the other hand, a $100,000 investment in the XAU Philadelphia Gold and Silver Index over the same time period would have been reduced to a paltry $67,148. This means our CIO newsletter has yielded an additional $98,111 on every $100,000 invested in the XAU Gold & Silver mining index over the last 7 years. And what about the supposedly wonderful performance of the US S&P 500 stock market? Over the exact same time period, $100,000 invested in the US S&P 500 yielded a mere $122,858, still far below the yield of our gold/silver concentrated CIO portfolio.

So why do we continue to register continuing extremely low sentiment towards gold and silver in the West, while the East is viewing these low gold/silver prices as massive buying opportunities to add more gold/silver to their portfolios? The answer is the efficacy of Western anti-gold, anti-silver propaganda that never discusses facts but depends on sensationalism to conjure up irrational fear in people that convinces them to stay rooted in assets that will harm one’s wealth instead of purchasing assets that will preserve one’s wealth. I’ve often heard people say that great wealth is built by being courageous enough to buy assets that are extremely undervalued when no one else has the courage to do so. This saying is far from the truth. It’s not about being courageous, because one can be full of false courage, rash, and lose the shirt on your back. Contrary to this popular saying, preserving and building wealth is about:

(1)Digging deep enough underneath the surface to understand truthful perspectives about markets that the vast majority of people don’t; and

(2)Using this knowledge to allocate capital by taking intelligent calculated risks that are very likely to pay off in the future.

Being able to execute (1) and (2) is far different than just being courageous. In fact, as gold and silver approached their interim highs in 2011, we specifically instructed all of our members NOT to buy gold and NOT to buy silver at these rapidly rising prices and to wait for significantly lower prices before purchasing. Of course there are people that listed to word on the street about “chasing the hot asset” and made the mistake of purchasing gold close to $1900 an ounce and silver close to $50 an ounce. Many of these people, if not most of them, have since dumped all their gold and silver at big losses and have forever sworn off ever buying physical gold and physical silver again because of their failure to execute (1) and (2) above. Recall that we first advised our clients to buy gold at $560 an ounce, silver at about $11 an ounce, and then to purchase even more for the long-term at price points over the past decade when the prices corrected very significantly. In fact, again it was people’s failure to execute (1) and (2) that prevented people from taking action when we suggested that $560 an ounce gold and $10-$11 silver were great buys in mid-2007 and reiterated that $10.30 silver and $780 gold were “steals” in late 2008.

Granted, 2013 was a difficult year for those holding gold and silver assets, due to extreme banker manipulation of paper gold and paper silver prices, even as physical gold and silver markets became tighter around the world. However, as long as one adheres to (1) and (2) above, even with an occasional mistake, one should still not feel any pressure to sell gold and silver during banker artificially-engineered price raids as this will keep one’s long-term outlook crystal clear in the face of short-term sell-offs that will not endure.

What caused last week’s super spike in gold and silver prices? The answer is simple: Ongoing escalation of Central Bank currency wars. Thus far, the results of these global fiat currency wars has been devastating on many people worldwide, though these financial crises are largely being unreported, underreported, and flat-out ignored in the mass media. For example, the banker currency wars have devastated the poor in Jamaica. Recently GATA printed a story that revealed that it now costs $25 Jamaican dollars to buy a small packet of pepper, $200 Jamaican dollars to buy a single pound of chicken, and $400 Jamaican dollars to buy a pound of mincemeat. In other words, in 2014, a Jamaican can only buy food that will feed one for perhaps a few days for the same price one could have fed five people for five weeks 15 years ago. In Venezuela, the costs of eating out have risen by about 70% over 2013 as the Venezuelan bolivar has collapsed due to Central Bank, BIS, IMF, and World Bank policies. As a result, fish restaurants in Venezuela are often without fish to serve their patrons. In Brazil, in just the first six months of 2014, the price of coffee has soared 71%, pork by 42.5% and the price of oats by 29.1%. If you had no clue that Central Bank policies have been creating mass starvation and hunger among the poor in dozens of countries around the world, and this is the first you have heard of these unforgivable outcomes of Central Bank currency creation, we believe that it is absolutely imperative for you to take some time today – not tomorrow, not next week, and not next month – to understand this. Why? Even if you are in a country that has not been afflicted by such conditions, the soaring prices in other countries have been created because of plummeting valuations of the US dollar, Euro, Yen and British Pound created by the Central Bankers in the US, the EU, Japan and the UK. What does this mean? It is 100% guaranteed that these same conditions will come to your country at some point in the future even if your country’s currency seems relatively stable today (despite banker lies about real inflation rates and given the absence of a return to sound money and the end of the immoral fiat currency system).

In fact, this melt-up in food prices all around the world (including Western nations like the US and the UK) is 100% predicated on Central Bankers deliberately melting down fiat currency valuations. If you have noticed a spike in food prices rising in your country but bankers are still toting low or moderate inflation rates in your country, this observation is a very simple way to know that the bankers are lying about inflation rates. So what about buying silver and gold now at these prices in June of 2014? Is this another grand opportunity to buy during another interim and artificially-engineered lull in gold and silver prices, as we informed people in October of 2008? And why would you want to buy gold and silver anyway? To receive the answer to this question, watch the video below: 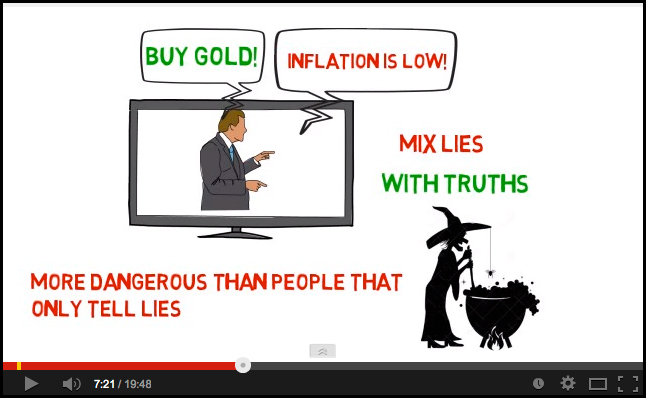 In the end, wealth preservation is never about courage. It’s much more about understanding your risk-reward schematics and being intelligent enough to seek out truth in the face of the elite’s disinformation and propaganda campaigns. Though interest in buying gold and silver as a wealth preservation strategy is ironically always the lowest when prices are the lowest and the highest when prices are the highest, this harmful behavioral pattern of investors is simply due to a lack of understanding of market truths and an inflexible faulty reliance on financial talking-head propaganda to make decisions.

In order to help guide you in making the right decisions, we have based our prices for our services on a gold standard, meaning we cut our prices and they are the most affordable when gold prices drop and simultaneously when the best opportunities to buy present themselves. That means, right now, we have a Summer Sale of 25% off of our prices from October 2012, and we have added another 5% discount flash sale for the next two days only, for a total 30% discount off prices on all our services. However, once gold prices start rising significantly in the second half of 2012, so will our prices.

Please visit us at https://www.maalamalama.com to download the fact sheets about our services and at https://www.smarktnowledgeu.com/magento to visit our shopping cart to take advantage of this Summer Blowout Sale.

Prev post War is a Banker Racket, Explained in One Photo
Next post Is the Truth About Malaysian Airlines MH370 Being Suppressed?