Evidence of Runaway Inflation: Would You Pay $82MM for This?

Evidence of runaway inflation has been seeping into the art world lately. We discuss below what the insanity in the world of art auction prices portends for financial markets and the ongoing banker currency wars. Recently, the top 10 lots at a Christie’s and a Sotheby’s art auction fetched about $800 million, illustrating the desperation of the uber wealthy to dispense of their counterfeit, heavily devaluing, fiat currencies and to convert them into hard assets. Here is the list below of the auction prices of these 10 lots.

Last week, we informed you that out-of-control inflation in Argentina has resulted in 2015 cell phone prices now being equal to prices of a 2001 automobile. Given Central Banker’s currency wars, this insane type of hyperinflation that has afflicted prices in Argentina now and that has now afflicted the high-end art world is certainly very possible to afflict one or more of the world’s major currencies within the next couple of years as well, especially as the pillars of the criminal banking cartel’s fraudulent Ponzi schemes continue to fracture with each passing month. The global bond market will probably be the next pillar to not only crack, but to eventually crumble. The continuing fracture of the fraudulent global banking system will manifest itself in imminent severe attacks on spot gold and spot silver prices, and when these attacks occur, this will again be a huge omen to the awake of the massive fragility of the entire global banking system.

And instead of wasting money on hugely inflated pieces of art in the upper echelon of the art world that is highly likely to depreciate in REAL value in the coming years (even if it appreciates in hyperinflated currencies as has happened in Argentina), we recommend converting your devaluing fiat currencies into more reasonably priced hard assets by supporting local artists like Christopher Crane in Austin, Texas. For more information on these hyperinflated Rothkos and Warhols and much more reasonably priced Cranes, please watch the video below. 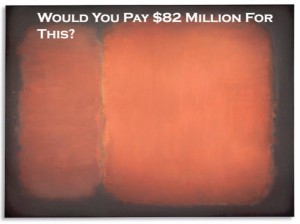