Even After this Strong Run, Gold Stocks are Still a Bargain Today. Here’s Why.

As those of you that are familiar with my many past writings about precious metal stocks, you may find this article’s headline very curious as I’ve always preached, “Never chase stocks higher, especially precious metal stocks, as their volatility always provides opportunities in the future to buy them at better prices if they have just risen rapidly.” So am I changing my tune now? No. Just modifying my viewpoint as every smart investor never remains steadfast and unchanging in his views in light of new, compelling information.

I’m going to use a couple of charts to make my point today.

If we look at the chart for Newmont, one of the largest gold stocks by market cap, in the world, I’ve pointed out a curious development. When the underlying commodity of gold was trading at $834 an oz., NEM was trading at $56.17 a share. Now that gold has skyrocketed more than 10.67% to $923 an oz., NEM is actually trading at a lesser price, at just $54.49 a share. 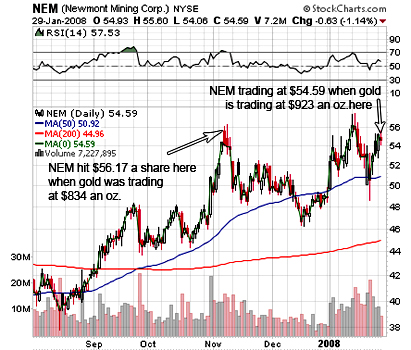 ationships between the price of gold and the price of gold stocks, NEM should be trading somewhere in the range of $75 to $88 a share now. So what’s going on? One of the reasons why gold stocks are lagging the price of its underlying commodities is narrowing profit margins as mining costs rise. Many gold mining operations are outside the United States, so gold mining companies must pay their expenses in a rising foreign currency but sell gold in the falling dollar. This most definitely cuts into their profit margins. Still, most gold companies with savvy management hedge against currency risk because after all, they are expanding mining operations because they expect gold to rise and the dollar to keep falling. So this can’t be the reason why majors are selling at discounts of 40% to 50% of what historical relationships would project. NEM is not the only major gold stock chart that looks like the one above. Numerous major gold stocks today are still trading at prices very similar to their share price when gold was trading at $834 an ounce.

So what can be the reason? Is the price of gold set to crash? I don’t think so. This story was just reported out of Johannesburg, South Africa by the Guardian on January 25th:

“South Africa’s power crisis today forced the world’s three largest gold mining companies to shut down their operations as the government called the rolling blackouts across the country a “national emergency” and threatened to ration electricity. In an unprecedented move, the state power utility, Eskom, ordered the mining houses – AngloGold Ashanti, Gold Fields and Harmony – to evacuate all underground staff and cease mining in order to cut electricity consumption to “minimal levels”.

That is a HUGE, in capital, bold letters HUGE, development. Normally, when gold breaks out of a ceiling that has provided resistance for months, that ceiling becomes the next floor. Remember gold only broke the $700 an ounce ceiling just a few months ago before rocketing much higher. Normally the $700 level would become the next floor. With the world’s three largest gold mining companies shut down indefinitely, $900 may very well become the new short-term floor, and certainly I don’t expect gold to correct back to $800 anytime soon. So because gold stocks are trading at prices that are more in line with $800 and $830 gold rather than $900 or higher gold, what is going on?

Is the same thing going on with junior gold stocks? To answer this question, let’s look at Lunding Mining company. The pricing divergence between gold and gold stocks is even more pronounced here that it is with Newmont. 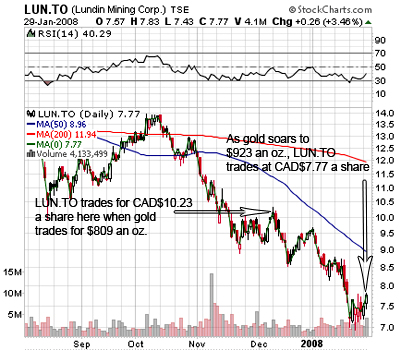 LUN.TO is actually selling at a 24% discount to its price on December 10, 2007 even though the price of the underlying commodity of gold has since risen by more than 14% since that time. Though Lundin Mining is primarily a base metals, and not a precious metals, company, I have merely used a chart of their share price for illustrative purposes as most junior gold stocks (while they may have recovered to a greater extent than Lundin Mining) still are trading way below their share prices of two months ago when the underlying commodity of gold was at $834 an ounce. Of course with junior resource stocks, one can’t view all junior stocks through a similar lens, as junior stocks must be segregated by their position in the commodity maturity cycle (i.e. are they explorers, developers, acquirers, producers are a hybrid of all the above?). Still, the fact that many junior gold stocks are selling at prices lower than their share price when gold was selling for $800 to $840 an oz. begs explanation.Here I think the answer to this conundrum is twofold. First, there are very few people that truly understand precious metal stocks. Certainly the number of people that understand precious metal stocks within the commercial investment industry is almost non-existent. For example, take a look at the headlines that originated from large commercial investment firms in just the past couple of weeks.

Remember when Goldman Sachs declared shorting gold as one of their “top 10 trades for 2008” at the end of November, 2007 and the price of gold immediately reacted to this announcement by shedding more than $15 an ounce to $780 an ounce? But where is the price of gold now, just two months later? The result is that the commercial investment industry leads the retail investor down the wrong path, and many people panic sold out of precious metal stocks when they shouldn’t have.Though I’ve been invested in gold stocks for over two years now, if I were not invested in any gold stocks as of today, January 28, 2008, would I still buy gold stocks, even at these prices? The answer is yes. I’m not saying that gold stocks will soar from this point on, but at some point, they will. Even if they correct in the next month or two or we are greeted with temporary weakness in precious metal stocks, I would not worry. The odds firmly point to the fact that even at today’s prices, they will be firmly higher 12-18 months from today. And that’s a bet I’m willing to take.

For more specific information about how to make a fortune by investing in precious metal stocks, consider a maalamalama Platinum Level membership or a subscription to the maalamalama Global Stock Picker investment newsletter.

(Disclaimer: J.S. does not currently own NEM or LUN.TO in his portfolio)