Don’t Be Faked Out By the Stock Market Head Fakes 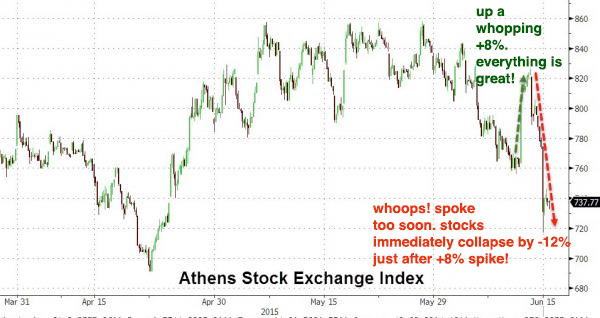 In the chart of the Greek stock market above, the Greek stock market surged a massive +8% , with 7% of the surge happening in one day after the MSM (mainstream media) did what it does best – lie and falsely report that the Greek government had agreed to impose more austerity measures upon Greek citizens to bailout the bankers. Of course, as soon as it was revealed that the MSM was lying, as usual, the Greek stock market immediately plummeted by -12%. And this is the nature of the head fakes we are going to see in stock markets, real estate markets, forex markets, and commodity markets as long as the MSM is intent on being a propaganda tool for banker lies. At the current time, the most pressing situation for the Greek government is a 1.6 billion euro debt payment due to IMF bankers at the end of this month, which they cannot make right now.

If Greece were the US, then the Bank of Greece would merely create the 1.6 billion out of thin air to make the debt payment and Greece would have no problem at all, as this is the modus operandus for US Central Banker month after month and year after year to make good on all their debt payments for which they lack funds. But of course, the MSM would have you believe that Greece’s economy is far more troubled fundamentally than any other nation that welcomes and houses rogue Central Bankers that have buried their nation in debt. From a fundamental perspective in regard to debt, the US, Japan, St. Kitts and Nevis ARE Greece. From a real world perspective, the US is not yet – yet being the key word – in as much trouble as Greece because Greek bankers do not possess the same unlimited powers as US Central Bankers in that can create as much currency out of thin air as they desire, at any time they desire.

In other gold news, when a State institution doesn’t trust the largest private bank in the nation and opts to pull $1 billion in physical gold from the vaults of this bank to be housed in its own State funded vault, this is clearly a sign of massive distrust for the banking industry in general. This week, the University of Texas Investment Management Company announced that it will pull $1 billion of gold from the vaults of the US Federal Reserve to house its gold in a newly established State gold bullion depository. There is absolutely no reason to do this unless the UT investment management company does not trust US Central Bankers and believe that US Central Bankers would steal their gold, so do not underestimate the symbolic meaning of this action that is not being reported by the MSM at all. It’s good to see that the UT Investment Management Company’s top officials have not been unduly influenced into poor decisions by the MSM and have decided to take personal responsibility for the welfare of their investments by pulling them from bankers and storing their sound money themselves outside of the banking system.

There is no doubt in my mind that head fakes, the kind witnessed in Greek stock markets this past week, will continue to materialize in nearly all global capital markets, including Chinese stock markets, European stock markets and US stock markets, as the MSM’s false narratives will push asset prices counter to how they should be behaving. And as has happened in Greece, these false price swings will then be followed by huge price swings in the opposite direction. For more information on how to separate the wheat from the chaff, don’t forget to subscribe to our YouTube channel and to come by maalamalama.com as well.

The reality: US corporations continue to lay off thousands of workers.

Gap to Close More than 1 Out of Every 4 Stores. Nearly 40% of All Gap Stores Will Have Been Shuttered

US Industrial Production Lowest in 5 Years

In the meantime, facts do not seem to matter to the MSM narrative… 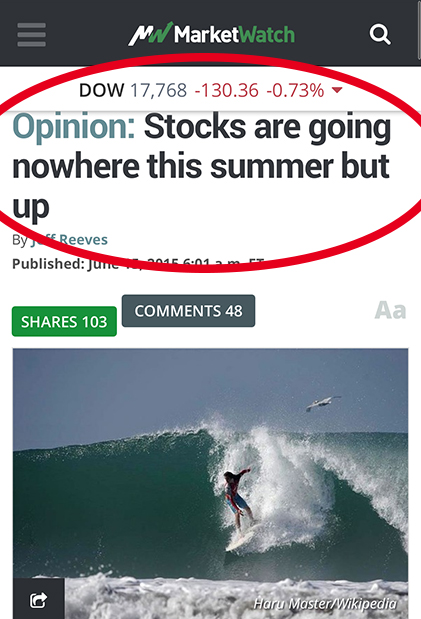 Prev post Here's What We Said to Expect from US Payroll Numbers, Silver and Gold Markets Yesterday, and Here's What Happened
Next post MSM Lies v. Independent Media Truth

The Necessity of Avoiding Group Think For Future Financial Survival

The Possibility No One Has Considered

Science as a Candle in the Dark: How the Oligarchs Fooled Us into Rejecting Science and Embracing Lies

Purchase my novel, The Staggering Depths of Blissfulness