Today we talk about the many fishy circumstances surrounding Germany’s alleged repatriation of 120 tonnes of gold, 85 from the US Federal Reserve and 35 from the Banque de France. Again, as was the case with the 5 tonnes allegedly repatriated from the US Federal Reserve in 2013, 50 of the 85 tonnes repatriated from the Fed Reserve bankers in 2014 was melted down and refabricated into new bars which indicates that of the 90 tonnes returned to Germany, that a minimum of the repatriated 55 tonnes was not Germany’s gold but belonged to another country. Common sense dictates that if the Federal Reserve still had Germany’s original bars then there would be no reason to melt down their original bars and refabricate them into new bars before returning them. So the still unanswered question is, “From where did this 55 tonnes of gold come?” In addition of the 35 tonnes that were reported to be in their original state, there still has been zero photographic evidence of this and only the word of bankers’, which, anyone knows is worth less than the paper on which it is written. Furthermore, of the 67 tonnes of gold repatriated from the Banque of France in the last two years, there has been no photographic evidence provided that these bars were returned in their original condition either. They may very well have been the original bars, but the important point is that there is zero transparency even in repatriation efforts and the exchange of gold between Central Bankers. 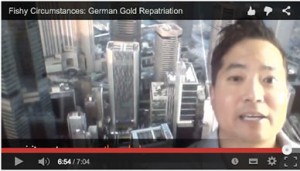 To watch the “Curious Case of German Gold that Came From Nowhere”, click the above image  and then click the text “Watch this video on youtube”