Could This Government Nationwide Leak Halt the NWO Plan for Digital Currency Enslavement?

Today, we take a look at the two-year old nationwide data breach of the Swedish Transport Agency, in which STA personnel mistakenly uploaded personal data of millions of Swedish citizens to the cloud, where unauthorized personnel had access to this data. Even though this happened in September 2015, the Swedish government covered up this massive act of incompetence from their citizens even as they encouraged all to accept a nationwide digital monetary system that now could possibly be exposed to massive theft. We discuss the implications of perhaps the biggest government data leak in history in the below SKWealthAcademy vlog. 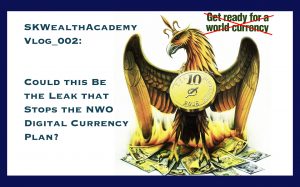 Covid Lockdowns Have Created a World of Fight, Flight, or Obey

Is the Biggest Bitcoin Crash Still Ahead of Us?

The One Chart that Exposes Journalistic Repugnancy

Stop Self-Sabotaging the Most Important Choices in Life