Hands down, the best way to trade stock market volatility day today is simply not to do it, cash out, and purchase hard assets, in particular, precious metals. Attempt to trade stock market volatility given how rigged every market in the world is today, and you will eventually get burned, and likely burned badly. Of course it is very possible to trade market volatility and also make loads of money but in order to do this, one has to wait until near-perfect set ups exist and as every trader knows, the enemy of most traders is patience and most enter in and out of markets way too frequently. Thus, the opportunities still exist to trade volatility but since markets today are way less “free” than they were even just five years ago, the dangers of doing so are more marked and more leveraged against the retail trader and more in favor of the behind-the-scenes manipulator. For example, sometimes the trades will go in the direction many believe as in the huge decline of Facebook since its overpriced IPO, but at other times, stocks such as Chipotle Mexican Grill (NYSE:CMG) can be hyped and overvalued for months on end as long as hedge fund managers and trading algorithms decide to pump and support the stock. Thus, stocks whose shareprices are artificially pumped and supported by algorithms will not decline gently but instead, come crashing down when the decline finally begins (CMG’s shareprice has lost about 45% in just the past four months). However, most retail traders simply are not willing or are simply too trigger-happy to wait weeks, and sometimes even months for that near-perfect setup. Get sucked into these volatile markets, the bulk of volatility which is artificially created by computerized algorithms and has nothing to do with supply and demand dynamics and economic strength and weakness, and you will lose. Today, the weakest companies can rise for months on end and the strongest companies can fall for months on end because trading algorithms have seized control over stock markets and made honest and integrity and economic soundness moot principles in the short term.

As anybody that has been investing in global commodities or stock markets can tell you, today’s market, thanks to the massive deceit and fraud of global investment firms enabled by technological advances such as high frequency trading (HFT) algorithms, it is easier than ever for industry insiders to rig stock markets and commodity markets to trade in whichever direction they desire in the short-term, especially given the misguided faith of retail investors that they are playing on a level field and in a free market instead of an acutely and massively rigged one. Though markets have been rigged for over a century, the rigging has become more ruthless due to technological advances and due to industry buyouts of regulators and the justice system whose top employees look the other way when presented with hard evidence of their criminal behavior. It is our strong belief at maalamalama, that if one chooses to invest or remain invested in the broad global stock market indexes today, that one is committing at best, the financial equivalent of not investing, but gambling and at worst, financial suicide. In fact, we strongly believe that one would have better odds of growing one’s money if one simply chose to liquidate one’s portfolio, headed to Macau or Vegas, and slapped one’s money down at a roulette table and simply bet on red or black. As crazy as it sounds, this likely would yield better odds in growing one’s money than the choice of letting it rot in the broad stock market indexes as capital to be leeched away by the Wall Street and global commercial investment banks.

The 5-minute charts of the S&P 500 ETF SPY below provide a perfect example of the rigged nature of the market of which I speak. Look at the end of trading this past Monday in which there was absolutely no rational reason for the broad US stock market index to recover from steep losses experienced earlier in the day. Yet volume surged in the last hour, and in particular during the very last minutes of trading, and up, up and away US markets went contrary to any rationale explanation. However, since there was no true reason for markets to experience a parabolic ramp-up to the end of trading Monday, come Tuesday morning, all of the last minute gains of the US S&P 500 index were surrendered with additional losses within the first minutes of trading. 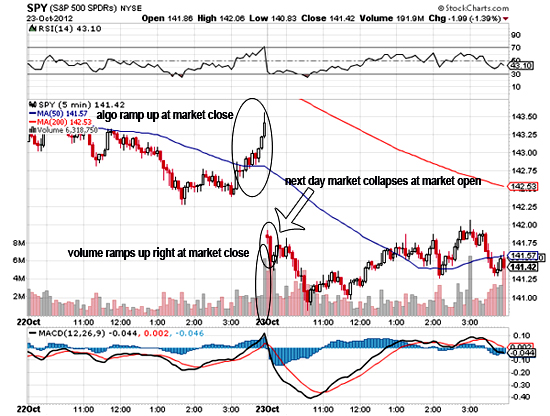 Riggers of markets love this kind of volatility because market riggers, by nature of the simple fact that they are controlling the ramp ups and ramp downs in the stock market, will make money on both sides of the trade. However, when there is no rationale for markets or stocks spiking higher or lower in random fashion, the average Dick and Jane will likely be fleeced by participating in such rigged markets.

Regarding gold and silver markets, one also has to understand the mechanisms of short-term rigging games. Long-term, the markets will eventually move in the direction they should, but short-term, markets often violently move in directions opposite to the direction they would move if free markets existed, due to these banker rigging games. For example, with the US Presidential elections looming just around the corner, and when runaway gold and silver prices would pull back the curtain on the land of Oz to reveal everything that is truly wrong with the economy that the government-corporate cartel wishes to hide, then whether to buy, hold or sell gold and silver mining stocks at a high-risk inflection point needs to be the top consideration that guides behavior versus having one’s behavior solely driven by technical chart patterns. Thus, even if gold and silver prices should be rising given the fragile state of the global economy, understanding and making decisions based upon short-term rigging games in gold and silver assets always takes precedent over what should happen. “What should happen” is what inevitably materializes in the long-term. “What should happen” may or may not happen in the short-term with gold and silver assets.

Thus, one needs to understand the rigging games much more so than supply-demand dynamics when assessing when to buy and when to sell gold and silver mining stocks. Regarding broad stock market indexes, there is just no sense for anyone that truly wants to build wealth to continue to participate in any of the rigged broad based stock market indexes other than to go short or go long on a short-term basis and exit after short-term profits have (hopefully) been garnered. But to let the riggers cull your money over and over and over again by employing a death-inducing buy and hold strategy over investment periods that extend over years in broad based stock market indexes will surely usher in the death of your wealth. Consider that since the year 2000, in more than 12 years, the S&P 500 is still down -3.82%! And forget about the absolute rubbish propaganda that the S&P 500 in 2012 is outperforming all asset classes. With any management at all, gold and silver assets (incluing the performance ot top mining stocks) are absolutely slaying the performance of the S&P 500 this year and this will continue to be the case by year-end as well.

Furthermore, if you wanted to use a buy and hold strategy for the past 12 years, instead of suffering massive volatility and still being in the red (and even more so when considering the massive loss in purchasing power of the USD in the past 12 years), one should have just been stacking an asset class, precious metals, that banks have always denigrated as unstable and volatile. Gold has risen for 11 straight years after being basically flat in 2000 and silver, while more volatile, has produced 8 positive years out of the past 12 years, but still, like gold, produced comparable cumulative returns of 497% versus 505% for gold (when priced in USD). So which would you rather own? Stocks, a volatile asset class that the commercial banking & investment industry is perpetually pushing you to buy and hold like your corner dealer, that has produced a -3.82% LOSS after 12 years, or gold and silver, assets that the same industry says is risky, but have respectfully returned enormous gains for those wise enough to ignore the nonsense of the commercial banking & investment industry propaganda. In fact, when given this perspective, the buy and hold advice of the commercial banking industry in global stock markets versus their advice to STILL stay away from physical gold and physical silver given the drastic differences in wealth building is truly laughable (and yes, the commercial banking industry, even if they have told you to buy the GLD and SLV ETFs, are STILL telling you to stay away from physical gold and physical silver with this banking industry-serving client driven behavior).

With computerized algorithms able to ramp markets higher or lower at will based upon transparent stop and buy trigger prices, the ones doing the rigging can literally create extreme volatility to create profits for the industry and losses for you over and over and over like a bad dream. In fact, Wall Street and the commercial banking industry has even learned how to even use technology to paint charts at times to produce a false breakout primarily for the purposes of suckering in new longs just before they create declines to cause the longs to sell out at losses. Vice versa, they also have the ability to paint charts with false breakdowns to sucker in new shorts just before they ramp up markets to create losses for the shorts and cause them to run for cover. Thus, in the end, the best way to trade stock market volatility successfully is simply to take your money elsewhere and to avoid the whole pump and dump and dump and pump scams of the commercial banking industry. Turn to hard assets like gold and silver and to the mining companies that produce them and while you will still experience volatility, with a little seasoned guidance, you will be infinitely happier with your results. It is our strong belief that, as was the case for the previous 12 years, hard assets or companies that produce hard assets, will continue to greatly outperform broad stock market indexes in future years as well.

About the author:  JS Kim is the Managing Director & Founder of maalamalama, a fiercely independent, anti-Wall Street investment research & consulting firm  with a focus on precious metals. Despite the industry’s false claim in Bloomberg and Businessweek that the S&P 500’s +12.25% YTD performance has far outperformed all other asset classes in 2012, JS Kim’s flagship Crisis Investment Opportunities newsletter has nearly doubled the S&P 500’s YTD return thus far at a +24.33% YTD return as of market close on October 23, 2012. This article may be reprinted as long as the entire article, links, and author acknowledgement in this section remains intact. Violaters will be asked to remove articles that do not conform to these republication rights from their websites.

Prev post Presenting the New maalamalama Daily Gold & Silver Vlog
Next post How Can You Help America? Let Politicians Know What You Think by NOT Voting Tomorrow & By Buying 1oz of Physical Gold & Silver Instead