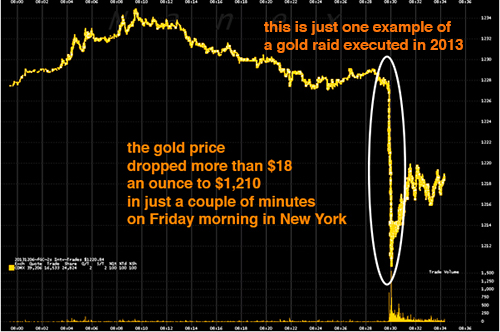 This week is a big economic statistic reporting week for the US economy. On Wednesday, at 8:15 AM NY time, the ADP employment number will be released, which represents data from about 24 million employees from 19 of the major North American Industrial Classification (NAICS) private industrial sectors. This number will then be followed by release of the US Central Bank’s Open Market Committee’s (FOMC) minutes at 2 pm NY time. Then on Thursday, the US will release at 8:30 AM weekly jobless claims data and end the blitz of economic data by releasing non-farm payroll and unemployment rate data at 8:30AM NY time on Friday.

I must warn you that the US Federal Reserve, the Bank for International Settlements, and the bullion banks have always sought to raid the gold futures markets during times of heavy and significant economic statistic releases, and I don’t believe that this week will be any different, especially given the US Administration and the banking cartel’s desperation to keep selling their story of a “continued economic recovery” in 2014. For example, Credit Suisse incredulously just released an article predicting a bull market in the US dollar in 2014 and the Times of India just released an article stating that “Gold is no longer a safe investment” because of one bad year that followed 12 consecutive years of rising prices. Imagine if the mass media ran articles declaring “US stock markets no longer a safe investment” after 2008, when the US S&P 500 crashed by 50%, a far worse crash that gold’s 29% decline in 2012. Can’t imagine this ever happening? You’re right, because it never would happen.. What better way to start off the New Year with this continued theme than a major bang in economic statistics and one final raid on gold prices? Thus I believe that there will be some “manufactured” statistics that produce some upside surprises to the consensus forecasts for the weekly jobless claims number (335,000), the nonfarm payrolls data (190,000) or in the FOMC minutes released this week combined with a raid on gold futures to keep deception and misinformation of reality of the public at a high level.

Though gold is currently trading at about $1242 as I write this, don’t be surprised if gold is raided heavily this week again for one final time, even to the sub-$1,150 level, which would represent a $100+ drop from current levels, before then reversing rapidly for good for the remainder of this month.

Prev post All the Big Banks are Saying Gold Will Crash in 2014 But That’s Not What Will Happen
Next post Is Germany's Gold Housed in New York, Paris and London All Gone?