Are Republicans or Democrats Better for Gold & Silver Performance? 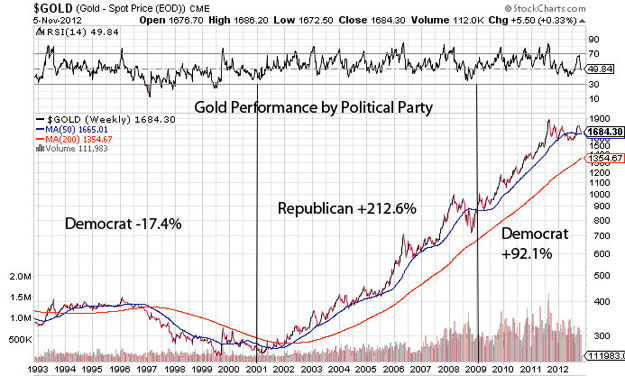 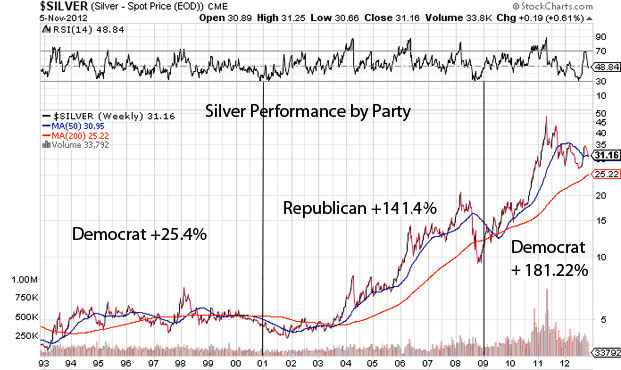 Today, bankers have to create an illusion of massive gold and silver supply by falsely creating billions of paper ounces of gold and silver in the futures markets that simply do not exist in the physical world, aka the REAL world, because they have no more physical gold and silver to sell into the market to suppress the price of gold (or no more physical gold and silver with which they are willing to part). Thus, they are struggling right now to crush the price of gold and silver at a time when all major global fiat paper currencies are right now at their most fragile point in history on their way to worthlessness. Again, we endorse neither the Republican or Democrat candidate in today’s US elections as we believe both candidates are awful choices, so we have presented the two charts above merely for your digestion, and interpret the charts as you may.

About the author: JS Kim is the founder and Managing Director of maalamalama, a fiercely independent investment research & wealth consulting company. His flagship investment newsletter, the Crisis Investment Opportunities newsletter, with a focus on Precious Metals, has yielded +24.87% as of November 1, 2012 versus the +12.86% return of the S&P 500 and the +4.01% return of the Philadelphia Gold & Silver Sector index over the same time period.

Prev post How Can You Help America? Let Politicians Know What You Think by NOT Voting Tomorrow & By Buying 1oz of Physical Gold & Silver Instead
Next post The REAL World Series of Poker is Going Down Right Now