In a speech retired US Army General Wesley Clark gave in August of 2001, we are reminded that many wars and major military theater operations are planned years or sometimes even decades in advance and that the excuses to justify them are likely fabricated. In this short speech that General Clark gave more than 10 years ago, he stated that the US had already planned to invade Iraq, Syria, Lebanon, Somalia, Sudan, Libya and Iran. We already know that Iraq has fallen, that Libya has been taken out, that there is a brutal ongoing war in Syria and in the Sudan now, that there has been ongoing war in Somalia since 2009, and that war in Iran now seems inevitable. Furthermore, a quick look at the map below shows that the only two countries important to the control of oil transport routes in the Red Sea, the Persian Gulf and the Mediterranean Sea not on Wesley Clark’s 2001 list are Egypt, a country in which the Arab Spring originated and former President Mubarak has already been ousted, and Saudi Arabia, a long-time standing US ally. But could there possibly be another much more important commodity than oil that is really the driving force behind these interventions? 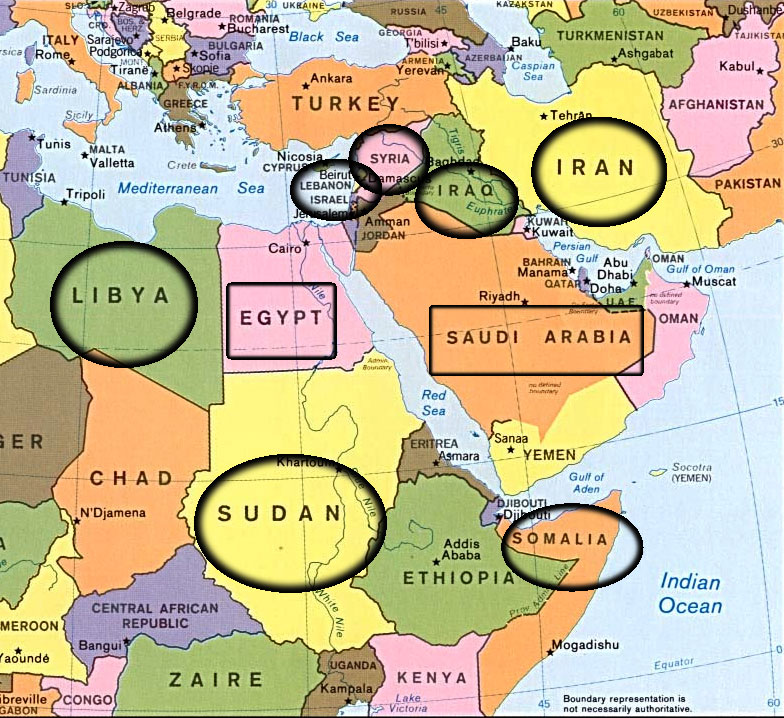 Upon deeper investigation, it also seems highly likely that the Western global banking cartel has been involved in some capacity in the industrial-military complex planning of these invasions and government overthrows in Africa and the Middle East due to the peculiarly timed nature of these events. For example, Saddam Hussein ruled as an often brutal dictator in Iraq for more than 23 years. During a particularly brutal campaign launched against the Kurds and other ethnic minorities in Iraq from 1986 to 1989, Saddam was alleged to have murdered up to several hundred thousand people. Though the US military had clear opportunity to kill Saddam during the first Iraqi war in 1990, they did not. When Saddam announced his desire to start trading Iraqi oil in Euros instead of US dollars in 2000, the US subsequently declared war on Iraq again in 2003, and this time Saddam was executed.

In Libya, despite Muammar Gaddafi being the official ruler of the Libyan Arab Republic from 1969 to 1977 and then the “Brother Leader” of the Libyan Arab Jamahiriya from 1977 to 2011, a span of more than four decades, the US had never chosen to engage Libya or to act upon evidence of human rights violations and the brutal repressive tactics of the Revolutionary Councils in Libya, and not even after Gaddafi allegedly tried to procure a nuclear bomb from China in 1972, and once again in 1977, from Pakistan, at least not in an open manner though covert theater operations certainly could have happened during this time (except for limited airstrikes in April of 1986 in response to a Libyan-directed Berlin discotheque bombing). According to Wikipedia and other numerous sources, “in 1986, 2000, and the months prior to the 2011 civil war, Gaddafi announced plans for a unified African gold dinar currency, to challenge the dominance of the US dollar and Euro currencies. The African dinar would have been measured directly in terms of gold which would mean a country’s wealth would depend on how much gold it had rather than how many dollars it traded.” In fact, Gaddafi vowed to create a United States of Africa that would trade their resources with each other solely based upon the Islamic gold dinar. By October, 2011, in a NATO-assisted and allegedly covert US heavily-supported operation , Libyan forces captured and executed Gaddafi, thereby ending the possibility of a united African continent that used gold, and not the US dollar or the Euro, for international trade.

Finally in Iran, President Mahmoud Ahmadinejad helped establish the Iranian oil bourse in February of 2008 and announced that Iran would start trading their oil in currencies other than the US dollar as of March 20, 2012. Iran has for years, relayed its desire to trade oil in rupees, rubles, yuan and other denominations besides the US dollar. In turn, the EU has already imposed potentially crippling financial sanctions that have disabled Iran’s access to SWIFT, a worldwide financial messaging system that’s used to arrange international transfers of money. However there are fairly easy tactics to circumvent SWIFT in executing international trade. For example, if the Indian government really wanted to purchase Iranian oil in rupees despite the EU sanctions, it could set up a bank account in an Indian bank for the Iranian government and just deposit rupees into that bank to circumvent the SWIFT system. Ditto for Russia, ditto for China and ditto for any other country. Thus, the ability to circumvent SWIFT in international trade is exactly why the US has now also threatened India with economic sanctions unless it agrees to heavily curtail its Iranian oil purchases.

Ahmadinejad’s announcement may be the final straw that break’s the camel’s back in ensuring that a Western led invasion of Iran will finally happen, and if it does, again the real reasons behind the invasion will be the military-industrial complexes support of a corrupt, immoral monetary system backed by European banking oligarchs called the fractional reserve banking system and not some imaginary Iranian WMDs of which there currently exists no concrete proof.

About the Author: JS Kim is the Founder & Managing Director of maalamalama, a fiercely independent investment research & consulting firm dedicated to purging the global financial system of all deceit, lies and propaganda that currently pervade the industry.

Prev post In Today's Risk-Filled Markets, Can You Afford to Be Misled By Fantasy Financial Reporting?
Next post Insider Trading 9/11...Unresolved, by Lars Schall