A Market Rally in Monopoly Money

When priced in US dollars, the US stock market appears to have rallied significantly since the beginning of the year, now up 18.31% since January 1st. However, since the dollar has fallen 5.82% since the beginning of the year, if we subtract the dollar decline during this same time period, the 18.31% gain drops to a 12.49% gain. This is a more honest means of interpreting this rise, for as we all know, a gain in real wealth is not determined by solely having a greater amount of a certain currency but also by adjusting for the increase or decrease of that currency’s purchasing power as well.

Looking at the below graph, since gold has been considered a currency for thousands of years, if we price the behavior of the S&P 500 in terms of gold, the gain in the S&P 500 since the beginning of the year shrivels to a 3.92% rise.

So depending on what currency you would like to hold in the future, your perspective of the current rally in US markets will change dramatically based upon the currency lens through which this rally is viewed (even if you don’t believe the compelling evidence that the US Federal Reserve and government have been tampering excessively in US stock markets this past summer to artificially manufacture this current rally. Personally, for the past several years, I’ve preferred to hold currencies with zero counterparty risk). 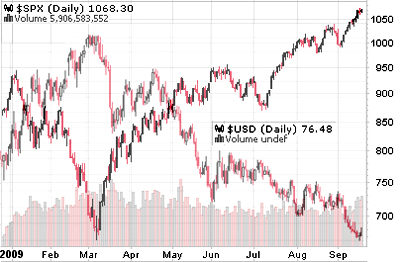 Finally, I’ve produced one final chart above where I’ve superimposed the chart of the US dollar (daily) over the chart of the S&P 500 (daily) since the beginning of the year. I haven’t taken the time to adjust the scales of both graphs to accurately represent percent moves for comparative purposes because I only wish point out that the chart patterns of the S&P 500 and the US dollar have been near perfect inverse images of each other for this entire year. As I’ve stated before, as long as Wall Street computers keep using low summer-like trading volumes to manipulate this market higher, the market can continue to melt up on the back of a devaluing dollar before it will eventually melt down. And as long as the US Federal Reserve continues to try to appease public anger by giving the public greater amounts of a worthless currency in a monetary game the public, by and large, fails to understand, I will continue to hold my currencies in forms that have zero counterparty risk. This, despite the fact that we are due for some strong short-term volatility in gold and silver for which we will take appropriate hedges.

Prev post The Coming Blowback of Banking Fraud
Next post Dissecting the Next Crisis - The US Federal Reserve. What Is It Good For?