January 19, 2007 – I know that J.S. has blogged several times about Miyamoto Musashi, arguably the most famous samurai ever. I’m going to write about him as well in this article to illustrate the difference between the typical mindset of an investor versus what it should be.

I’m going to paraphrase a story I read about a young samurai that sought an apprenticeship under Musashi. 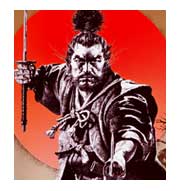 When Musashi agreed to teach this young samurai, the young samurai did nothing but chop wood and fetch buckets of water from a far away spring. The young samurai viewed this as paying his dues in the master-student relationship so he didn’t complain. However, the days of chopping wood and fetching water soon turned to weeks, and then months without a single lesson from Musashi with the sword. Still the young apprentice did not complain. The months eventually turned into a year, and then the year turned into another, and yet another. Finally, after doing nothing but chop wood and fetch water, the young apprentice began to question if Musashi was just using him as a servant or if he was ever going to finally start his apprenticeship as a samurai. Fine, Musashi said, I will begin teaching you now since you’ve been so patient.

Musashi instructed the young samurai to go to the dojo and carefully walk around the edge of the tatami mat without missing a single foot. So the apprentice listened. He walked from morning to evening every day, and again the days grew into weeks, the weeks grew into months, and the months grew into a year. Still the apprentice did not question Musashi.

Finally, after an entire year of this arduous walking, the young apprentice begged of Musashi,

Please, I want to learn the true way of the samurai.

Musashi listened to the pleas of his obedient apprentice, and replied.

Okay, today I will begin teaching you.

Musashi then proceeded to lead the apprentice to a deep ravine. There, a tree trunk spanned its fatal depths. Musashi looked at his apprentice and said, Walk across. When the apprentice hesitated, Musashi said, You have walked along a thin line, not missing a single step, everyday from sunup to sundown, for an entire year, yet you can not walk across a log that is much much wider along a distance that is a tiny fraction of the distance you walked every day? Upon hearing this logic, the young apprentice’s fear of dying dissipated, and he strode with confidence across the log to the other side.

Musashi then told the young apprentice that his training was complete. He told the apprentice, I trained your body for three years by having you chop wood and carry buckets of water. I trained your mind not to waver by having you walk along a narrow line for an entire year. Finally, I solidified the harmony among your mind, body, and spirit when you faced death and were not afraid.

So what is the point of this story? The point is that in martial arts, no progress is possible with those that have a mindset of immediate gratification. The belt system so many are familiar with in the Western world — white, yellow, green, blue, purple, brown, black — is a Western invention to appease the need for immediate gratification, i.e. “if the belt color around my waist is not changing, then I am not learning.” In Asia, even today, in many schools, there are still only two belt colors — white and black. You are either a student or master, and just because your belt remains white does not mean you can not possibly be learning. Musashi’s apprentice became a true Samurai with a “warrior spirit” precisely because of his patience to learn the proper way.

In building wealth today, it is extremely rare to see people with the patience it takes to become “samurai investors”. People will spend a lifetime learning to play an instrument or learning a sport but yet refuse to invest several hours a week for just a single year to learn the most important endeavor of their lifetime — how to invest properly. People spend $100,000 a year for an exclusive country club membership but are unwilling to pay a fraction of that cost to learn how to invest properly. Today, it is very rare to see the patience displayed by Musashi’s young apprentice in learning a craft. Today, you probably could not find one kid anywhere in any developed country that would have the patience to last even two months if he or she had to train similarly to Musashi’s apprentice. In investing, the equivalent of Musashi’s apprenticeship would require just a fraction of the effort – a few hours a week for a year, with ongoing refinement and customization of investment strategies for several more years- and still people are unwilling to invest the time.

However, those that do are the ones that become millionaires, and sometimes even billionaires.

Prev post A Great Independent Financial Consultant Can Be Worth More Than a Million Dollars - Literally.
Next post 10 Reasons the Long Tail of Investing is the Only Way to Build Wealth