How to Profit From a Weakening Market, Gold Stocks, & More, Part II

February 28, 2007 – On our home page of our website, I have posted these sentiments about what I term the Peak Investment Crisis: “As of the 4th quarter of 2006, the fact that it hasn’t started yet is a tribute to how crafty global governments have been in hiding from the public the factors that will expedite its onset. However, once it gets started, a fast and scary roller coaster ride is sure to follow. 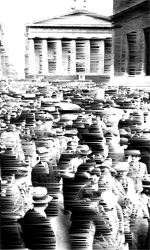 Investors that gain awareness of this investment crossroads in the early stages will earn significantly more money from this cycle than later investors, though later investors will still be able to reap substantial benefits as well. Those investors that remain ignorant of this crisis until the downward spiral is well under way will simply lose much of their wealth.”

Granted, we at maalamalama really glance over a discussion of options because our investment system concentrates on long positions. But establishing long positions in inverse funds is one way to bet on markets declining. If you don’t know what I mean, just read part I of this blog, because it is still not too late to establish some significant positions in inverse funds to counteract any further near-term volatility in your portfolio.

So do I think this is the beginning of the Peak Investment Crisis?

The stocks that were the darlings in the financial media have turned into the ugly ducklings of today, with downgrades of stocks happening left and right. How long do I think this correction will last? A minor recovery in U.S. markets have many pundits in the U.S. already speaking of a one day correction and that’s it. But I don’t see it that way. There is inherent weakness in the U.S. markets that lurk well below the surface that is rarely discussed in the financial media. It’s not to say that today we’ll resume the slaughter but I see the probability of continuing corrections greater than not. Sentiments for recovery are not as strong in European and Asian markets as many of them continued to slide yesterday. However, again, I view this not as the trigger for the Peak Investment Crisis because the economic conditions that will trigger that are entirely different than those that gave rise to this recent correction. This is a correction. One that was needed, and one that was overdue.

On the contrary, the Peak Investment Crisis is akin to a child holding his finger in a tiny hole in a dam to hold flood waters back. Eventually the child will tire and the dam will break. And when it does, there are several other asset classes, not just gold, that I strongly feel will benefit very nicely and provide the safest places to invest your money. And this is what will really send the investors running for the hills, not this correction. You will definitely want to be residing in the longtail of investment options at this point.

Even with this correction, you will be sure to hear many investment pundits in the media claim that there is no good reason for this correction and that the bulls will soon seize controls of the global markets again. In some regions of the world, this seems to be the case, although run ups for months on end with not even a blip of a correction is a good reason for a correction. However, where some of the bloodletting has been the greatest like in the Chinese markets, China’s economy seems better equipped to continue growing at its current pace at least for 2007 than say, India.

But before you climb on board this bandwagon, review the reasons why sometimes financial experts are always positive even in the face of negativity by re-reading my partner Kaeho’s blog entry from about a month ago. Remember, building significant wealth in the stock markets is not just about uncovering ignored asset classes that are poised to skyrocket but it is also equally about being prepared for the twists and turns ahead and about expecting the unexpected.

Most financial pundits that receive the greatest media exposure don’t spend anytime digging down the rabbit hole to uncover the truth behind government statistics, employment reports, consumer confidence reports and growth reports. That is why the majority of investors continue to be caught off guard. Dig down the rabbit hole and uncover the truth, and surprises on the investment horizon will be far and few between, if at all.

J.S. Kim is the founder and Managing Director of maalamalama, a comprehensive online investment course that uses novel, proprietary advanced wealth planning techniques and the long tail of investing to identify low-risk, high-reward investment opportunities that seek to yield 25% or greater annual returns.