3 Reasons Why Traditional Educational Institutions Will Stifle Your Ability to Build Wealth. 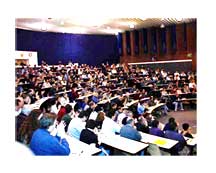 One of the most important determinants of building wealth during your educational life would have been a solid course in the history of education. Why? Because a solid understanding of the roots of institutional education would enable you to realize that most education puts you in debt at the same time as never teaching you how to build wealth. Henry Ford once stated that it was a good thing that people in America had no understanding of how banks truly worked because if they did, there most likely would be a revolution by tomorrow morning. This statement still holds true today. 99.9% of people, even the very people employed by banks, have no true understanding of how banks control economies. As well, most people have no true understanding of how educational institutions work. If they did, many people would realize that formal education can often hurt their ability to build wealth even more than it helps.

Most people, no matter where they are educated, go through their educational life learning to become robots. The “authority” figure tells them that A+B = D and if the student disagrees and argues that A+B = C, then his or her reward is a less than satisfactory grade. So students spit back what the teachers tell them to think, they receive good grades, and for their obedience, are later rewarded with a good job. It’s a perfect process to produce the perfect cog in the machine, the pod people represented in the film “The Matrix”.

How Educational Institutions Feed into the Debtor System

More times than not, to attend higher education at a top ranked global institution, one will accrue between USD$80,000 to USD$200,000 in debt by the time one graduates, in essence trading an “elite” education for a lifetime of debt. Even if a family is wealthy enough not to accrue enormous debt to send their children to the top schools in the world, their child, before he or she even graduates, needs to start establishing “credit”

if he/she ever wishes to successfully apply for a car loan or a home mortgage after graduation. However, “credit” is an extremely funny choice of words considering that to establish good “credit”, one has to rack up lots of debt. If you don’t rack up lots of debt and in turn prove that you can pay off this debt responsibly, then you will have “bad credit” instead of “good credit”. And without “good credit”, even if you have $1 million of “credit” in the bank, you’ll have no credit. And with no credit, you won’t be able to get a car loan or a home mortgage. Not even with $1 million in the bank. Not unless you offer your money as collateral for a secured loan.

If we look at the founders of the U.S. educational system, the moneyed elites founded Temple University, Vanderbilt, Johns Hopkins, Cornell, Duke, the University of Pennsylvania, Columbia, Harvard, and Stanford just to name a few. In the seminal book “Education and the Rise of the Corporate State”, Joel Spring wrote that “the development of a factory-like system in the nineteenth-century classroom was not accidental”. Russell Conwell, a member of the wealthy elite, validated Spring’s assertion with statements he made before he founded one of America’s oldest educational institutions, Temple University:

That is one of the most ridiculous statements I have ever read in my life but yet the American educational system was largely founded to sustain a caste system of rich and poor. In the late 1800’s and early 1900’s, masses of students were trained to conform in their thinking and any dissent to the teachings of these universities was discouraged and punished with poor grades. If you were rich, it was because you were a good person. If you were poor, you deserved your fate, because poverty was a sinner’s fate. Even though this was a hundred years ago, not much has changed with the “modern” educational system. For the most part, in classrooms all over the world, conformity is still “King”.

How Traditional Education Kills Critical Thinking, the Most Important Skill to Build Wealth

As an example of how yesterday’s psychology is still applied in today’s classrooms, I distinctly remember a university course in which I strongly dissented with the professor’s opinion. The professor’s argument just didn’t hold any weight in my mind. Though I crafted entirely well constructed arguments to support my dissenting view on the next exam, the professor “rewarded” my critical thinking with a C+. On the following examination, having learned my lesson, I spat back exactly what I knew the professor wanted to hear. For my utter lack of critical examination of any of the key issues, I was rewarded with an “A”. This lesson in conformity occurred within the “revered and hallowed” halls of an Ivy League institution, and such manufactured conformity spills over into the corporate world once these institutions graduate their students.

If Copernicus had accepted the Catholic church’s teachings that the earth was the center of the universe, people would have continued believing that the sun circled the earth for a hundred more years. If the Wright brothers had accepted the universal belief that flying was for birds only and quit due to the ridicule heaped upon them for their “unachievable” pursuits, we still might not be able to fly today. To illustrate how blindly people accept what they are told, recently I read an article where astronomers agreed that Pluto is not a planet, so they stripped Pluto of its accepted planetary status since 1930.

But when I was a kid going through school, if you didn’t mention that Pluto was a planet on a science exam, your answer would have been marked wrong. Even if you gave the same exact arguments that astronomers gave today, you would have been wrong. Your teacher would have told you, “Look, it’s in our science book. Pluto is a planet,” and another lesson in conformity would have taken place. If a hundred years ago, somebody started teaching the world that the moon was made out of cheese, everybody today would believe the moon appears as a yellow orb in the sky because it is made out of cheese. It is only when universally accepted beliefs are shunned that groundbreaking progress is possible.

If I owned a revered institution of education,I would teach at least 10 courses that aren’t currently offered by any traditional universities: (1) The Long Tail of Investment Analysis 101; (2) The Long Tail of Investment Strategies 101; (3) Gold and Other Precious Metals; (4) Major Global Currencies and Their Effects on the World Economy; (5) Investing in Hard, Tangible Assets; (6) How to Leverage Money; (7) How to Identify the Debtor System and Beat It; (8) Corporatocracies: The Relationships of Governments, Banks, and Corporations; (9) Who Controls Money Flow Around the World; and (10) The Myths & Lies of Global Investment Firms.

Every single one of these course would be a thousand times more helpful in building wealth than Economics 101 or Marketing 101 type courses that are currently offered in the venerable halls of our elite learning institutions. Yet no one seems to want to offer them. Could it be that those that benefit from this knowledge have no intention of ever sharing it with the masses? This is exactly why I founded maalamalama and why I strongly believe that formal education is only worthwhile if you are pursuing a career that requires a specialized degree in medicine, engineering, architecture, law and so on.

Otherwise, years of liberal arts educations or even attaining a business major is pretty much useless in helping you build wealth. I have never used anything I learned about marketing theory, economic theory, statistics theory from business school in building wealth. What I’ve learned outside on my own time, comprised of the ten courses above, is what I’ve found to be useful.

J.S. Kim is the founder and Managing Director of maalamalama, a comprehensive online investment course that uses novel, proprietary advanced wealth planning techniques and the long tail of investing to identify low-risk, high-reward investment opportunities that seek to yield 25% or greater annual returns.