Yesterday, US stock markets fell heavily, with the DJIA falling -1.92%, the S&P 500 falling -2.55% and tech stocks being the huge loser, with NASDAQ falling -3.04%. Yesterday, in this newsletter, we warned you to turn off the TV and put the Wall Street Journal, Forbes and Fortune down, as there is literally almost nothing but pure propaganda in mainstream publications today. Here is a sampling off propaganda being spouted in the mainstream media the past few weeks. 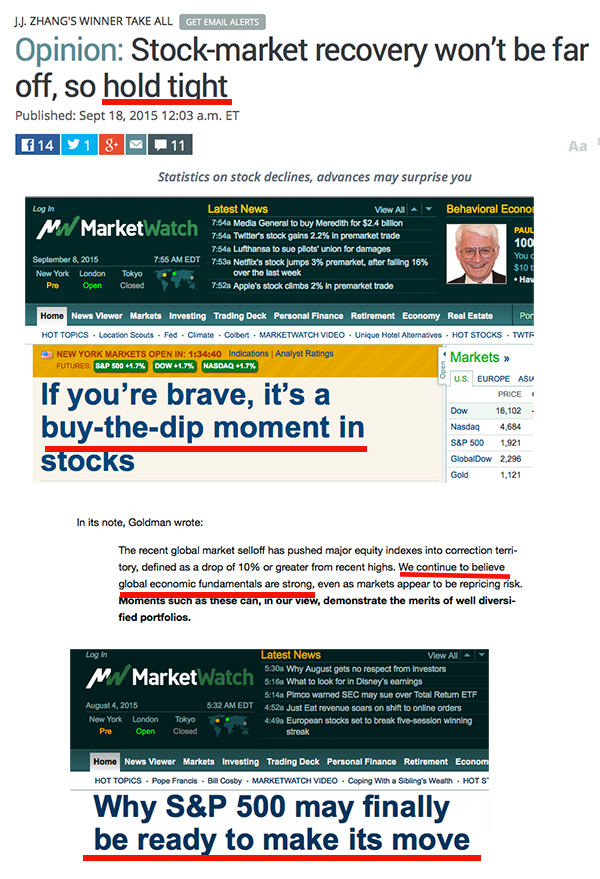 Just observing the above every single headline screamed buy, buy, buy! Mainstream media “journalists” have always been Commercial Banking’s cheerleaders with little regard for investigative journalism that tells the masses the truth and reality. Goldman Sachs wrote, “we continue to believe global economic fundamentals are strong” implying US markets would turn around and strongly rise, MarketWatch wrote, “buy the dip”, the “S&P 500 may finally…make its move”, and then crowned these propaganda articles last week with the proclamation to remain invested in US stock markets and to “hold tight”.

Meanwhile, what did we at maalamalama do a couple of weeks ago in light of these proclamations from the MSM of much, much higher US stock prices to come? We went short the US stock markets, which should have been evident to anyone that reads these newsletters, given our commentary the past few weeks. Yesterday, we closed out one of our short positions at a +34.60% gain, have very healthy gains on two other still open short positions, and have a very small nominal loss and a very small nominal gain on two other still open short positions. This follows another very successful shorting of US stock markets this past August when we held a position that increased by +72.79% in one month. Thus far, YTD, our Crisis Investment Opportunities newsletter has been firmly positive, outperforming the S&P 500 by +14.86%, the FTSE 100 by +17.75% and the XAU Gold & Silver index by a whopping +40.80%.

Since there has been little opportunity in gold and silver assets this year as the HUI gold bugs index is down -34.47% and with gold and silver in USD both  down YTD as well, with silver significantly down YTD, we have searched for opportunities to gain yield this year by consistently shorting the US stock markets and shorting gold and silver throughout the year to produce are firmly positive yield. With our Platinum Membership portfolio, since we have yielded a +31.6% yield with our gold and silver mining stocks YTD by only going long about 40 trading days this year, our Platinum Members have approximately doubled the yield of our CIO newsletter clients. However, though this year has been one of mostly hedging against volatile asset prices this year, the largest moves in US stock markets and precious metal prices have yet to come, and despite our strongly positive yields YTD, we believe the largest gains are still firmly ahead, though the timing of these future moves is near impossible to predict. So in the meantime, we wait, hedge, and remain patient.

While it is true that market movements in the DJIA index that manifest 500 points down followed by 500 points higher (due to banker manipulation) make assessing the short-term direction of stock markets extremely confusing, we warned yesterday that the best way to avoid being whipsawed into losses is to keep your eyes focused on the forest and not the trees. I expect the propaganda and deception to increase as we head into the end of 2015, so please stop following the headlines of mainstream media and start digging well beneath the headlines if you really want to understand where these current markets are heading. Whether you live in Asia, Europe, or the Americas, these are dangerous times all around that require a deep understanding of reality (and a dismissal of mainstream propaganda) to ensure positive yields.

The global economic crisis that started in 2008 never ended. It was just covered up and papered over with loose fiat currency policy by Central Bankers for 7 straight years. Unfortunately, this paper up and conceal strategy has now created fundamentals in paper stock and derivative markets that are actually worse at the current time than they were before global stock markets imploded in 2008.